The 9th “Dezign Pak” features 10 varied-theme ASL scenarios.  As with the previous year’s iteration, this pack is smaller than most previous ones, which is not necessarily a bad thing, assuming that the same amount of playtesting and development was spent on a smaller number of scenarios.  Otherwise, it is just smaller.

Half of the scenarios are large in size, though none are huge.  The rest are small or smallish-medium in size.  One scenario uses OBA; no scenarios use Night Rules or Air Support.

The weakest aspect of Dezign Pak scenarios is the historical research, which is sometimes near non-existent and from time to time results in major errors.  There is at least one example of this in Dezign Pak 9 in ESG111 (Horror Show).  Horror Show purports to depict a British attempt to clear the Burma Road in northern Burma in early 1945 from the retreating Japanese.  That description itself might give someone pause, as the attempt to clear the Burma Road in northern Burma was essentially an American/Chinese task (except for the British/Indian 36th Infantry Division).  The scenario card identifies the “British” unit as the 475th Infantry Regiment.  This might also give someone pause, as the British did not even have infantry regiments (they had infantry brigades; their “regiments” were actually battalions).  In fact, the 475th Infantry Regiment was not British at all, but American.  It and the 124th Cavalry Regiment composed Mars Task Force, the successor unit to “Merrill’s Marauders.”  Thus the unit depicted in the scenario as  a British unit with British squads and support weapons is actually an American unit.  It should be noted that even the simplest Google search of “475th Infantry Regiment” reveals immediately that it is an American unit.  To add insult to injury, the “British” are depicted as fighting against the Japanese 46th Division, but it appears the 46th Division never even got close to Burma.  Perhaps the actual unit was the 49th Division, which did fight in northern Burma.   The scenario’s accuracy is basically the real “horror show.”

Three of the scenarios in the pack are set in France 1940 and depict part of the battle for Calais.  They are the top three entries (out of only six) of the fourth so-called “Monkeys with Typewriters” contest.  This is a periodic on-line scenario design contest in which a handful of scenario designers, mostly novices, each attempt to design a scenario on the same action, given a limited amount of background material (in this case, only a few web articles).  ESG’s Glenn Houseman promised to publish the “winning” scenarios in the next Dezign Pak (one of which was his own).  The time frame for submission of the scenarios was tight and it is not clear how much the Monkeys scenarios were rigorously playtested, either during the contest or afterwards.

Of the three, the most interesting is ESG107 (Put Out the Searchlights), designed by Mark Harms, which depicts a small British force defending a bridge and some multi-hex buildings near it from a small group of German infantry with 3 tanks (and another as a late game reinforcement) and two halftracks.  The British have 3 LMG and 3 ATR, which all have a chance to kill the thinly armored German tin cans, but not a huge chance.  The Germans accumulate victory points by taking said bridge and buildings; the British accumulate CVP (and the Germans have a CVP cap).  Additionally–and this is perhaps the most interesting aspect of the scenario–the British can receive 3 VP for each of two A13 MK1 tanks they choose NOT to bring in as reinforcements.  This is a difficult decision for the British, as the tanks are certainly their best anti-armor weapons, but bringing them on makes victory easier for the Germans–moreover, the British player must make this decision on either turn 2 or turn 3, which means he may regret his decision in the second half of the scenario if things go south.  When this author played the scenario at ASLOK as the British, he made the decision not to enter any tanks at all, a decision that looked wise on turn 3 but not necessarily so wise on turn 5 (however, the author nevertheless won, as he is not just good looking but has brains as well).  The scenario seems like a tense tournament-playable scenario in which neither player will feel as if he has enough resources to do the job. 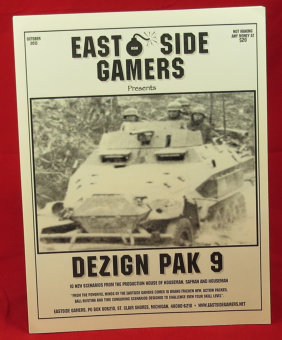