Along with Genesis ’48 and Guerra Civil, Dien Bien Phu (DBP) was one of three historical modules released by Critical Hit early in the 21st century which were designed to have much more depth and better quality components than its earlier historical modules.  The historical map is attractive if a bit drab, depicted in the earth-tone hues of green and brown that would become Critical Hit’s standard map artwork style for some years to come.  The three 8″ x 22″ maps, which are not truly geomorphic in that they do not cleanly mate with other ASL maps of that size, but do mate with each other, are not as attractive, but this is more because of the nature of what they represent:  flat, more or less featureless terrain marred with shellholes.  They are used in many of the DBP scenarios (only 6 of the included scenarios take place on the large historical map).   A miniature version of the historical map is included to help with the campaign game; a nice touch.

The counters are nice enough–certainly better than those in Guerra Civil–but the MMC artwork leaves something to be desired.  At that time, Critical Hit made its MMC outwork out of a single head-on standing soldier, which it would use in triplicate for the requisite three-figured MMC artwork.  As a result, Critical Hit counters of this period have a peculiarly static appearance to them, unlike official artwork, or for that matter, artwork Critical Hit itself used both in earlier and later points in time.  The French mostly use British counters (i.e., Free French); most of the included counters represent Vietnamese forces.  There are counters for everything from Bangalore torpedoes to recoilless rockets to Chaffee tanks.  The guns and tanks, of course, are rendered in Critical Hit’s fairly inscrutable “variant” counter layout.  Luckily, the scenarios are not vehicle heavy.

The 16-page rulebook might seem at first as if a lot of rules have to be digested to be able to get into DBP, but the reality is different.  The rulebook includes a title page, 3 pages of historical commentary, 1 1/2 pages of rules and notes for the French forces involved, 1 1/2 pages of rules and notes for the Viet Minh forces, some charts, and the campaign game.  The last page has a very useful play aid–a quick reference chart for the rules and capabilities of all the squad types in the game.  Unfortunately, the designers of DBP–the redoubtable Carl Nogueira and Dave Lamb–did succumb to the lure of adding yet more new squad value combinations to the system (in this case, there are 6-3-8s, 4-2-7s, 3-2-6s, and 6-4-8s with a 9 broken side morale).  One might think that the myriad squad value combinations already in the game might be enough.  Most of the special rules are for the Viet Minh, but none are complicated or out of line.  Overall, the presentation of forces is done well.

There are 15 scenarios; 6 use the historical map, 5 use geomorphic mapboards, and 4 use the included 8″ x 22″ mapboards (these last 4 all have extensive trench and/or wire networks as well).  Unfortunately, 5 of the scenarios are night scenarios.  Several scenarios involve French air support.  The majority of the scenarios are large; even the smallest still features 12 squads and 3 AFVs versus 6 squads and 3 guns.  One Platoon Leader campaign game (Champs Elysees) is provided; it is 6 campaign dates long.  To win it, the Viet Minh must control two of the three French strongpoints on the historical map.  Both sides have a fairly wide range of purchase options.  Two of the campaign dates take place at night.

Critical Hit Magazine Volume 7 Number 1 focuses on DBP, providing an analysis of several of the scenarios in the module, a countersheet that contains a number of counters to go with DBP, and several scenarios.  These include CH169 (Against all Hope), pitting French and Japanese against each other in Vietnam in 1945 (using DBP counters); CH168 (The Last Musketeer), which features French paratroopers and Egyptian militia in Egypt in 1956 during the Suez Crisis (combining Genesis ’48 and Dien Bien Phu); DBP17 (By Land, Air, and Sea), which uses 6 halves of geomorphic maps to present a wide-ranging 1952 Vietnam scenario; and DBP16 (Under Old Baldy), which is a medium-sized scenario that takes place on the historical DBP map.  All in all, this issue adds considerable value for purchasers of DBP.

Since its release, DBP has garnered a number of fans, as well as some detractors.  In all likelihood, it may be a matter of individual taste.  But for anybody interested in the wars in Southeast Asia, Dien Bien Phu is certainly an attractive possibility.

2nd Edition comments:  In the summer of 2008, Critical Hit published a new edition of Dien Bien Phu.  The main features of the new version were a slightly larger and somewhat re-done historical map (with more detail added), and improved (in both art and quality) die-cut counters.  Confusingly, the new edition came in three different versions, which did NOT all have the same contents.  First, there was the boxed edition of the 2nd Edition, which used left-over boxes from the first edition.  Nothing on these boxes indicates that the module is 1st or 2nd Edition; this can only be determined by opening the box and inspecting the contents.  The boxed edition contains all game components, including revised scenarios plus a few additional ones (at least two of which were previously printed in Critical Hit Magazine (see above).

The 2nd Edition Upgrade Kit was intended for owners of the first edition; it includes only the new components (i.e., no overlay, DBP geomorphic maps, or charts and tables).  Purchasers who also have the original Dien Bien Phu will have all components.

However, the 2nd Edition Ziploc Version is an INCOMPLETE version.  It does not include the overlay, the 3 geomorphic maps, or any of the scenarios that use the DBP geomorphic maps (it comes with only 12 scenarios).  ASLers who purchase this edition will not actually have the whole module.

3rd Edition Comments:  Critical Hit released a third edition of Dien Bien Phu in 2016, taking much longer to re-release the product than they usually do (the company constantly recycles its older products, usually with new names slapped on them).  This version contains some major differences from the previous two editions.

Most noticeable is that the one-sheet paper historical map is gone.  In its place come 9 12″ x 18″ heavy paper glossy map panels, which must be laboriously assembled to form the map area (experience has shown that assembling more than four panels is usually a pain).  The hexes in the third edition are far larger than in previous editions, so the map also takes up a much larger playing area–which may be inconvenient for many, as the map area is larger than many gaming tables. The artwork is somewhat redone.

There is also a noticeable difference with the 8″ x 22″ geoboards.  Whereas the first two editions came with actual geoboards, Third Edition Dien Bien Phu does not.  Instead, Critical Hit supplies six sheets of light cardstock, each with half of a geoboard printed on it.  Thus players must use scissors or some other implement to cut off the white strips around all six of these half geoboards and assemble those as well.  It is low quality.

The counters are very different as well.  First, they have been re-done with modern Critical Hit layout styles, a vast improvement over older styles, especially for guns and vehicles, which were virtually inscrutable under the old style.  Second, also an improvement, is that the many ugly two-toned counters are gone.  The Viet Minh now use regular Soviet brown, which was probably a good decision. The French continue to use British colors, which Desperation Morale officially dislikes, as they are not “Free French” and could have been rendered in regular French colors.  As it is, it looks like the Vietnamese are fighting the British.  Two-toned counters do make their way back into the DBP OB, however, for T’ai irregular troops and Vietnamese Army paratroopers (blue on khaki and green on khaki, respectively), but there aren’t many of these counters and they don’t look bad.  There are, however, about 25% fewer counters than in the first two editions.  Critical Hit claims (in the rulebook) that the product “has been significantly expanded to include three bonus countersheets.”  Only Critical Hit could reduce the number of counters in a product and claim that it has expanded the number.

Also reduced, greatly, is the size of the rulebook, down from 16 pages to only 6 pages.  This is accomplished primarily by cutting out the historical commentary and moving most of the charts and tables to a large play aid that appears on the reverse side of the game folio.  The rules and scenario cards have a modern Critical Hit layout, which also is an improvement over its older styles.

Is the 3rd edition a better option than one of the previous two editions?  All things, considered, possibly yes, in that the counters, rules and scenario cards are all better.  However, the historical map is a problem, since it is so large, and the  uncut geoboards simply suck.  But the edge probably slightly goes to the 3rd Edition over the older versions, assuming one has space for it. 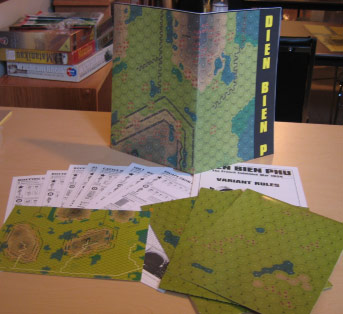