In the summer of 2012, Battleschool released the first set of its promised “nationality” dice, which are precision dice in which the 1-pip side is replaced by a symbol for a particular nationality.  This first set, the so-called “East Meets West Pack,” contains 5 of these nationality dice, as well as 5 more colored dice (that are not unique or different in any way) to accompany them.

The pack includes nationality dice for the Chinese (the Nationalist sun emblem), the Japanese (the red circle/sun emblem), the Americans (the U.S. Army green star), the Germans (the German military cross), and the Soviets (with a red star).  The accompanying non-special dice are blue for the Chinese, red for the Soviets, saffron for the Japanese, green for the Americans, and, for lack of an available feldgrau color, a sort of off-blue for the Germans.  Another version of this pack includes only the five nationality dice, without the five generic dice.

The pack is nice, although some ASLers might well have wished that the colored dice also had the corresponding national emblem.  It is not clear why they do not, unless it was a desire to keep the price down.  Hopefully they will release colored dice with these national emblems in the future, so that ASLers can have true sets. 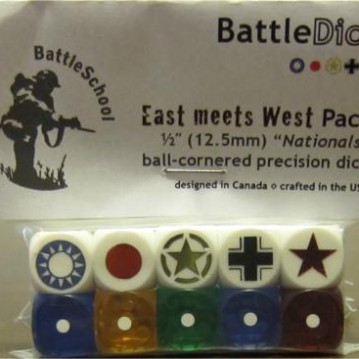