Elite Canadians (EC) is a scenario pack released by the Winnipeg ASL Club at CASLO XVI (the Canadian ASL Open tournament) in Winnipeg, Manitoba, Canada, in May 2012.  Every participant in the Jim McLeod Memorial Mini-Tournament received a copy and other attendees at the tournament could purchase one.

This is commendable for two reasons.  First, it is always a particular thrill for attendees at an ASL tournament to be able to receive a brand new scenario pack associated with that tournament.  It takes a lot of work and dedication to put a scenario pack together and only a few tournaments manage to do it (and in recent years only one tournament, the March Madness tournament in Kansas City, has done so regularly).  The Manitobans went at least a kilometer beyond here and deserve praise for the effort.

Second, their efforts are praiseworthy because they were done to commemorate Jim McLeod, the Winnipeg ASL player who passed away, before his time, in early 2009.  Perhaps over a 100,000 people own a copy of ASL, and the number of people who play at least semi-regularly numbers in the tens of thousands.  But the number of “hardcore” ASL players is far smaller and the “hardcore” ASL scene–the scene with clubs dedicated to the game, and tournaments, and people dedicated enough to read these words–is not that large.  That scene depends on key movers and shakers to keep it going.  They are the ones who design scenarios, host tournaments, publish newsletters, run websites.  Among this sort of people, Jim McLeod loomed large.

In the 1990s and 2000s, Jim McLeod was one of the most active and energetic ASL players in Canada and, without understating any of the efforts of others, it was largely through his energy and guidance that a connected “hardcore ASL scene” emerged and endured in Canada.  Jim was one of the founders of the Winnipeg ASL Club in the early 1990s and subsequently one of the founders of the nationwide Canadian ASL Association (CASLA).  It wasn’t long before Jim had established an annual ASL tournament for Canada, the Canadian ASL Open (CASLO).  Jim published a newsletter, the Maple Leaf Route, and even designed the odd scenario or two.  Eventually, he would become one of the people to work on an HASL about the battle of Ortona in Italy.  By the 21st century, the Internet had allowed Jim to become well known to an international circle of ASL players, not just to his fellow Canadians.  When he passed away, unexpectedly, in 2009, his passing brought out an outpouring of remembrance and admiration from the entire hardcore ASL community.

It is thus not surprising that his fellow Winnipeggers would want something tangible with which to mark his passing.   What they did was to create a special scenario pack formed out of the scenarios that Jim McLeod had designed in his lifetime.  They took the six scenarios that Jim had published in the Maple Leaf Route and added to them three new scenarios by Jim that had not previously been published.  All scenarios underwent revisions (from minor to extensive) and updating.  All of the scenarios appear in Elite Canadians in color on cardstock, using VASL graphics for the counters.  They are attractive in appearance.

The first six scenarios are the scenarios Jim released in Maple Leaf Route.  These scenarios are well-known to the ASL community, having not only appeared in that Canadian newsletter, but also subsequently in the pages (and downloadable at the Web site) of View from the Trenches, and, for a time, as a scenario pack from Lone Canuck.   They are all smallish, tournament-sized scenarios featuring Canadians in various theaters of war and in general have been well-received.  These scenarios are MLR01 (Hana-Saku), MLR02 (Troteval Farm), MLR03 (Mooshof Melee), MLR04 (Sneek Attack), MLR05 (Third Time Lucky), and MLR06 (Grenade and Bayonet).

The other three scenarios were apparently intended for the Maple Leaf Route but never published there.

Only a very small number of these were allegedly printed, so they may well become collectible.

Elite Canadians is a nice send-off for someone who was, by all accounts, a very elite Canadian himself. 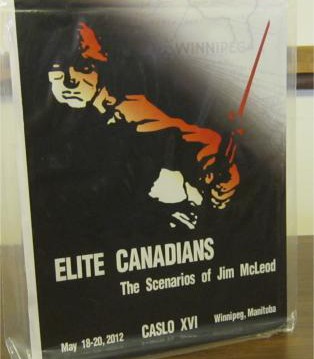