The latest in an endless series of crappy ASL “products” produced by Bill Wilder. In this release, Wilder focuses on some bizarre hypothetical combat in Afghanistan.  Here is the breathless marketing text:

IN THE LIGHT OF CURRENT EVENTS WITH THE ADVENT OF ISIS AND RESURGENCE TERRORISM [sic] THROUGHOUT THE WORLD, A NEW VARIANT OF ADVANCED SQUAD LEADER IS HERE!

NOW YOU CAN DO WHAT THE POLITICIANS ARE AFRAID TO DO, TAKE ON THE BRUTAL THUGS OF ISIS AND AL QAEDA IN A GROUND WAR IN SYRIA AND IRAQ!

President Trump has done what Obama was scared to do. Declare war on Isis!!! 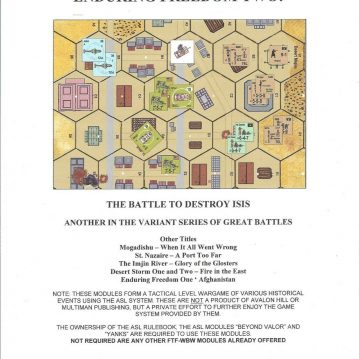