The third set of scenarios reprinted from the European ASL News magazine (and the occasional ringer from the U.S. newsletter On All Fronts), this pack concentrates on late war actions in all theaters.

In the review copy, scenario cards had copyright dates of both 1998 and 2003; it is not clear what, if any, changes were made in the 2003 printing.

This is a fairly forgettable offering.

2nd Edition (Euro 3: Search and Destroy) Comments: In the brave new world of 2020, Critical Hit released a new version of this ancient product under a different name.  Desperation Morale has not examined this product, but it is likely some of the scenarios have been tweaked. 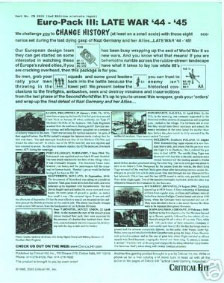