The Euro-Pack series of scenario packs began as reprints of scenarios from the European ASL News magazine, collected into a common theme (like the Battle of the Bulge).

EP91 (A Taste of Things to Come) is a DASL scenario.

The pack is not a particularly remarkable product. 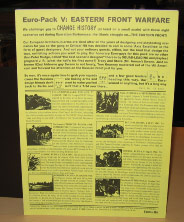