The Euro-Pack series of scenario packs began as reprints of scenarios from the European ASL News magazine, collected into a common theme (like the Battle of the Bulge).  However, this pack is an assortment of scenarios by mostly American scenario designers, with half of them designed by Scott Holst.

Oddly, two of the scenarios feature no “partisans and irregulars” at all.

They are not exactly stellar. E-P92 (The Walking Dead), for example, designed by Scott Holst, ostensibly represents an action from early in the 1944 Warsaw Uprising. However, the symbol next to the Polish OB is a Star of David–as if it were the 1943 Warsaw Ghetto Uprising instead. The Poles are inexplicably given Soviet support weapons (they had no Soviet weapons). Holst correctly notes that the Poles had several captured tanks, but he gives them Mk IVs instead of the actual Panthers.

Other scenarios are simply unbalanced or just not that fun to play.  Two scenarios, for example, start with one side surrounded and in vulnerable circumstances.

2nd Edition (Euro 6: The Walking Dead) Comments:  Two decades after its first release, this pack saw a new edition under a new name. Not seen by Desperation Morale, this edition seems to include scenarios only. It is likely some of them have been tweaked from the originals. 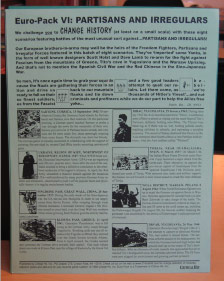