The inexhaustible imagination of Paul Kenny allowed him to publish his first independent scenario pack, Fanatic Pack #1, in 2002.  It would be the first of many.  The first Fanatic Pack was a crude production (there would be some  improvements in later packs), without even any squares for counters (instead, OBs are designated in the 447×8 format, which is often difficult to understand).

Proofreading and editing are minimal; fonts aren’t even consistent across scenario cards.  The appearance of the product looks sloppy and rushed and not what one would want for their debut effort.

Setting the tone for future Fanatic Packs, the actions in the first are varied, even including an action from the Russo-Polish War of 1920.   There are an equal number of small, medium, and large actions.  Their variety is an example of one of Paul Kenny’s strengths; an interest in obscure and exotic scenario situations.

As ASLers would subsequently discover, balance on Fanatic Enterprises scenarios was often iffy.  That is the case here as well, but there are several scenarios in the pack worth playing, including FE10 (An Abandoned Army) and FE11 (Italian Winter). 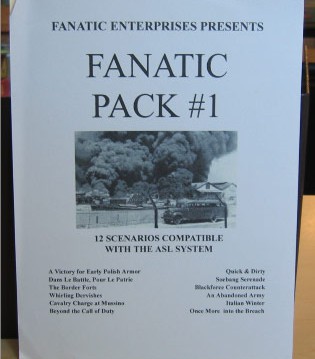