The sophomore effort from the prodigious hand of Paul Kenny was Fanatic Pack #2, another scenario pack featuring a dozen varied actions from around the battlefields of World War II.  It was similar in nature to the first pack, although with slightly better proofreading (although still subpar) and an improved scenario card layout (there are boxes to represent counters now, for example).  They are black and white, except for nationality symbols and one photograph.

The scenarios are weighted heavily towards the large; there’s 1 small scenario, 3 medium-sized scenarios, and 8 large ones.

One scenario features gliders and airdrops; three scenarios are Night scenarios; one scenario has OBA.  Several of the scenarios have balance problems and could have been playtested more (especially FE22, Ritpong Rampage).  However, other scenarios are quite fun, especially FE13 (Defeat at Seroczyn), featuring a Polish attack across a river against a German position.  The most played scenario is also fairly balanced: FE16 (Where the Bullet Meets the Bone). 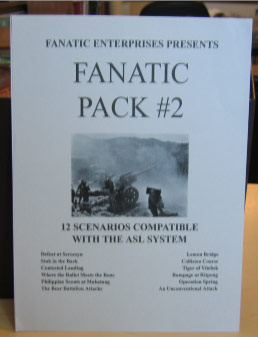