The fertile mind of Paul Kenny conjured up the third in his Fanatic Pack series of scenario compilations in 2003.  As with the other Fanatic Packs, this one includes a wide variety of actions from throughout the war, including:

As is typical with Fanatic Enterprise packs, the editing and proofreading is quite poor.  The scenarios are in black and white with colored nationality symbols (and, oddly, one color photograph).  Historical accuracy is also typically lax.  For example, FE46 (Old Fashioned Valor) is a Burma scenario featuring, in part, Chinese troops from the 200th Division.  The only problem?  That unit was chased out of Burma in 1942 and never came close to Burma again for the whole war.

In size, the scenarios tend towards the large; the pack has 6 large scenarios, 3 medium-sized scenarios, and 3 small scenarios.  One scenario features motorcycles (for both sides!) and two scenarios feature OBA (one with an aerial observer).

The France 1940 scenario, FE39 (Misfortune), is a nice tournament sized scenario that seems fairly well-balanced.  Another scenario, FE43 (The Thirsty First Goes In), is a very interesting PTO scenario (Bataan), but it favors the Japanese (especially the first time it is played).  With the U.S. balance, it is probably a more even contest.

As with most Fanatic Enterprises packs, the scenarios in this one have not gotten a lot of play. 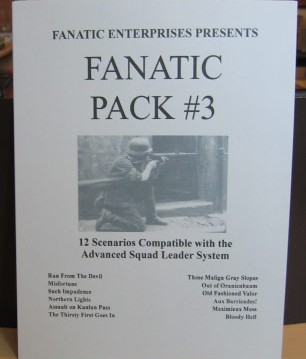