Hard on the heels of his Poland 1939 scenario pack comes another Paul Kenny effort, the fifth in his “Fanatic Pack” series.  Like previous “Fanatic” packs, this one is not themed, but rather presents a mix of actions with different theaters and nationalities represented.  As with some previous FE products, this one too lists few people as playtesters.  The scenarios are printed with an inkjet printer on cardstock with color ink (the use of color is always welcome on scenario cards).  The counters on the scenario cards have no counter art, only factors or identifiers.

Almost all of the scenarios are basically small or medium in size; there is only one large scenario in the pack.  Many of them would be suitable for tournament play (if size were the only consideration).  One of the scenarios in the pack, FE195 (Duty to the Emperor), uses a third party mapboard, board BFP-A from Bounding Fire Production’s Into the Rubble pack.

The historical accuracy of some of the scenarios leaves something to be desired.  The 1939 Polish-Soviet scenario FE188 (The World is Against Us), for example, refers to the non-existent “Russian 3rd Army Group” and to one of its constituent units, the “42nd Guards Tank Division,” even though the Soviet Union did not even begin creating Guards formations until more than two years later.  FE187 (So Glorious to Die) refers to the Japanese “18th Regimental Combat Team,” but regimental combat teams were an American creation.   FE195 (Duty to the Emperor) refers to the “reinforced 171st Tank Division,” but a moment’s on-line research reveals that the Soviet Army had no 171st Tank Division; the actual unit was the 171st Tank Brigade.  FE193 refers to the Italian defenders in that scenario by the designation “Campagnia Fucilieri, Leros Garrison,” but the Italian infantry unit there was the 1st Battalion, 10th Regiment, Regina Division.  At least a few of the scenarios are based on Wikipedia entries, a couple of them even paraphrasing Wikipedia text sentence by sentence for much or part of the historical description ( in one case, Wikipedia is at least acknowledged as the source).  The proofreading in the pack is sometimes pretty good but at other times poor, with historical text sometimes switching between present and past tenses; even “Wikipedia” is misspelled in the reference referred to above.  All of this speaks to a certain sloppiness and lack of care that is typical of Fanatic Enterprises products; one has to wonder if the playtesting of the scenarios was equally as hasty.

Of the scenarios, the two Polish-Soviet scenarios, FE188 (The World is Against Us) and FE189 (The Tragedy at Grodno), look the most interesting, because there are few scenarios that depict the Polish-Soviet clashes during the Polish campaign.  Both scenarios are city fighting scenarios.

The Platoon Leader campaign game included in the pack, FECG3 (San Nen Kire!) is also worth mentioning.  This six-date CG depicts a major Japanese counterattack against American positions on Bougainville in March 1944.  The Americans, led by Marines but soon replaced by the 37th and Americal Divisions, did not attempt to take the entire island, as was typical for most Pacific Island campaigns, but instead carved out a strategic perimeter to protect an important airbase, the need for which was the only real reason they landed on the island.  This left the rather large Japanese garrison in a quandary; it eventually decided to mass its forces for a major counterattack against the American perimeter in an attempt to break through and seize the airfields.  The Japanese attacked at three points, including the strategic Hill 700, around which this campaign game is based, but the Americans had months in which to fortify their perimeter and the Japanese attack failed after some minor penetrations.  The Hill 700 situation is a good one for an ASL campaign game (parts of it have been represented by two scenarios in Buckeyes! and one scenario in Le Franc Tireur #12), because both the Japanese attack and the 37th Infantry Division counterattacks occurred over a relatively small piece of ground.  For players interested in a manageable PTO campaign game, this might be a good opportunity, as long as they are comfortable with Night rules.

Overall, Fanatic Pack #5 seems typical for a FE product:  interesting scenario situations, but hallmarks of hasty production and possibly similarly hasty playtesting.  Though they may be fine for a casual setting, players or tournament directors should probably not choose these scenarios for a tournament setting unless they first play the scenarios in question and confirm their usability.

Since its release in 2010, Fanatic Pack #5 has not had any playings recorded on ROAR. 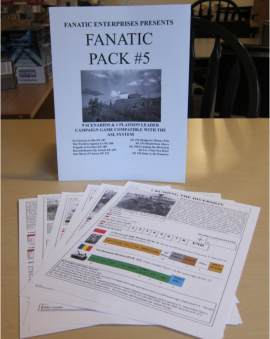