Fire for Effect was one of the string of first-generation ASL newsletters that cropped up in the early 1990s.  Like most such newsletters, and unlike most ASL newsletters today, it was not tied to one particular ASL gaming group or one particular region, but was designed for ASL players everywhere; in fact, its tag-line was “committed to the progress of ASL and its players.”   Fire for Effect was primarily the effort of Robert Wolkey, although it was made possible through funding by professional baseball player Curt Schilling (at the time a new and enthusiastic devotee of the hobby), who is credited along with Wolkey as a “co-editor.”

The newsletter was originally published bi-monthly, then quarterly.  Twelve issues total were published.

Content included strategy and rules articles, tournament news and reports, and player profiles.  Its content was fairly strong for a newsletter.  Like most ASL newsletters, Fire for Effect did not last long.  Curt Schilling went on to join Multiman Publishing, while Rob Wolkey teamed up with Ray Tapio to form Critical Hit (though he did not stay there long). 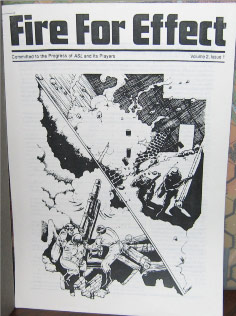