Contents:
One issue had one weird ASL scenario

Fire & Movement:  The Forum of Conflict Simulation wass one of the longest-running wargame magazines in history (1976-2010).  It was founded by Rodger MacGowan (who designed the covers for the original Squad Leader and its gamettes).  In 1988, the wargaming company 3W acquired it; shortly thereafter, 3W sold it to Decision Games, who published it until 2010, then tried unsuccessfully to turn it into a web-based publication.

Although its content varied over the years, Fire & Movement was known primarily as a wargame review magazine, rather than a magazine about gameplay, strategy, variants, or scenarios.  As a result, though throughout the years it  published articles related to ASL (typically reviews of new products), but did not really produce much in the way of ASL-related playing materials.

One unusual exception occurred in F&M #53 (May/June 1987).  Because 1987 was the 10th anniversary of the original Squad Leader game, F&M included a collection of articles related to SL and ASL.  Among them was an unusual 2-map set designed by Ralph Ivy.  These maps, on cardstock (labeled B & C) used hex center dots but not a printed hexgrid.  They were designed as part of a generic series of wargame maps (the “Combat Vision System,” intended to be part of a set of 8 to be released by RBM Graphics & Design Studios, MacGowan’s design company; apparently the others never appeared).  The artwork did not look like standard SL/ASL artwork.  The issue also included a scenario designed to use the maps, “Wrong Place for a Rest Stop,” set in Volkovisk, Soviet Union, on July 1, 1941 (although it appears to be a generic/fictional scenario).  It was designed by Stance Nixon. 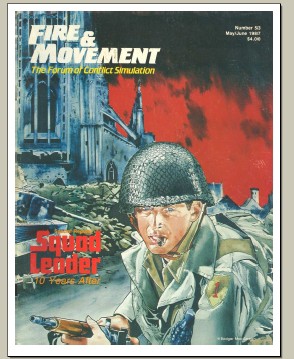