As one can see, there is some padding in this pack.  The Denmark die is basically just a waste of consumers’ money, as Denmark for all intents and purposes capitulated without a fight. Out of the thousands of official and third party published ASL scenarios, there are a grand total of three that feature the Danes (and they are stretching it).

Although the Netherlands fought for a few days (and again in the Dutch East Indies) and the Belgians for 17 days in 1940, very few scenarios exist to portray them (a quite unfortunate fact with regard to the Belgians, who engaged in a lot of heavy fighting in 1940), so these dice will not get much use.

Nor are there many scenarios featuring Norwegians.  This basically leaves the Polish die as the one that will be the most used, as the Poles fought on many fronts throughout the entirety of World War II.

Basically, though, the dice in this pack will rarely be used by the players who own them.  This is essentially for completists.

Each die is a white die with a symbol/emblem where the 1-pip would normally be.  No color die accompanies them.  They are attractive. 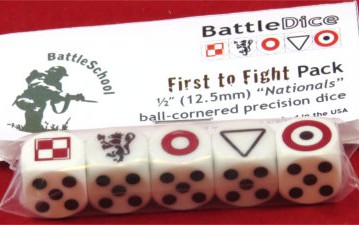