Home > Products > For King and Country

With West of Alamein long out of print and new ASLers unable to get their hands on the British order of battle without paying an arm and a leg, MMP decided to make the Brits available again, but without reprinting the less popular desert rules, maps & scenarios, saving them for a reprint at a later date.  The result was For King and Country, which includes maps from the original Squad Leader games, British ASL counters, and a large number of previously printed scenarios.  Chapter H pages for British guns and vehicles are also included (in the now-standard slightly larger font size than the original rules).

For King and Country was the first core module to appear in the “new” type of game box (MMP abandoned the style of cardboard boxes used by Avalon Hill and moved to the box style used by The Gamers, a wargame company acquired by MMP).  Some gamers don’t like these boxes, viewing them (erroneously) as less sturdy, but for ASLers, who don’t keep their components in game boxes anyway, it shouldn’t matter no matter what one’s opinions.

At the time of its release, newer ASL players were delighted–they now had the British and a large number of scenarios–while many ASL veterans were disgruntled, viewing the time and energy it took to make FKaC as a diversion from the presumably more important goal of finally printing the much awaited Armies of Oblivion.   However, now that it is out, ASLers see it as a meaty and substantial module.  It should certainly be near the top of the “get” list for any new ASLer.

2nd Edition Comments:  The original For King and Country sold out fairly fast, leaving newer ASLers in the same bind (no British counters) they were before For King and Country was released.  Finally, in 2011, MMP reprinted the module, with one significant change:  the mapboards (the counters have some unimportant cosmetic changes, for the better, while the scenario cards are slightly smaller, for the worse)).  Because MMP no longer used mounted maps, it could afford to put more maps in For King and Country than it had originally.  However, MMP did not just add maps, it also subtracted some, so that the 8 maps of 2011 FKaC include only 2 of the 4 maps of 2003 FKaC.  This is apparently because MMP chose to include Boards 1 and 8 in the third edition of Beyond Valor (the streamlining of the original ASL core modules into fewer, larger modules has been rather haphazard and unplanned).

Some copies of FKaC-2011 were inadvertently shipped with some countersheets from FKaC-2003.  There is no practical difference between the counters, but the colors are slightly different and the older counters have slightly smaller fonts and images.  MMP has been replacing these countersheets when requested (if applicable). 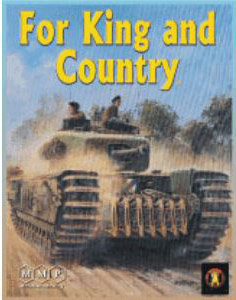