Although ASL has vibrant communities in North America and Europe, as well as players in Asia and other parts of the world, the ASL universe has been dominated by English-language products.   Almost no official ASL products have been released in non-English languages.

The first such product to be released was a Japanese-language 1st Edition ASL Rulebook.  Other ASL products have been sold in Japan with translated rules, but these appear to have been done by the retailer or distributor rather than authorized by Avalon Hill or MMP.  MMP has made French (http://www.cote1664.net/article.php3?id_article=74), Spanish (http://www.boardgamegeek.com/game/9823  and  http://http://www.boardgamegeek.com/game/15126), and Japanese (http://www.multimanpublishing.com/downloads/ASLSK1_jpn.pdf) language rules for the ASL Starter Kit available, but as downloads rather than as printed products, marketed and sold in those countries.

Some players have created their own homegrown translations of the rules as well.

Additional information about non-English ASL products (and images of such products) is requested. 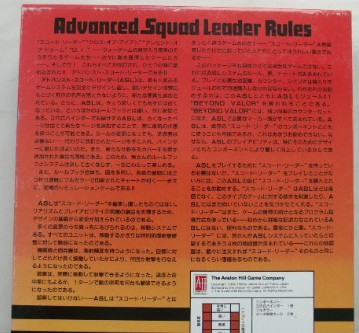