Fortress Cassino (FC) is the fourth Heat of Battle historical module and the last from its first “era,” before Eddie Zeman left and several new people came in to change the look and feel of Heat of Battle products.  It primarily focuses on fighting between the 2nd New Zealand Division and the German 1st Parachute Division in March 1944 in the third battle of Monte Cassino.

The historical map (used by 7 of the 10 scenarios) features the town of Cassino and the adjoining slopes of the mountain.  The map is decent, but not striking (it does, however, far surpass the map from the other Cassino module, Critical Hit’s Carnage at Cassino).  Unfortunately, some of the slope depictions on the map are hard to read and had to be specified in the module rules.  The small countersheet (designed by Nadir El-Farra) includes a few German artillery pieces and Allied fighter-bombers, underground passages, revetments, a flooded marker, tank cupolas and 35 counters representing 1st line New Zealand squads and half-squads.  The counters are attractive and well done.

Module-specific rules to represent the conditions around Cassino include rules for saturated and flooded ground conditions, large craters, underground passages, siege towers and the Fortress of Castle Hill.  Rules include caves but not cave complexes.  New Zealand squads are represented as 4-5-7 first line squads with a broken side morale of 8.  Though ANZAC, they are not stealthy.  As was typical of early HOB releases, full designer’s endnotes explain the rationale behind these various rules.

The scenario cards, unlike previous HOB releases, were printed in full color on glossy cardstock and new color artwork.  This was an interesting experiment that was only partially successful.  The map depictions on the scenario cards looked quite nice in color; however, the counter renditions on the scenario cards left much to be desired.  The SMC and MMC counters themselves were white, with colored figures.  However, the SW counters had black and white weapon depictions on a nationality-colored background.  This was quite odd; moreover, the shade of blue used for the German SW was very dark, which made the counter renditions very hard to read (this was also true, to a lesser degree, with the American SW counters in the one scenario featuring U.S. troops).  This experiment was not repeated.

Most of the scenarios represent the March 1944 actions featuring the Kiwi troops, but several scenarios depict other actions from the months-long battle for Cassino that feature Americans or Gurkhas.  Most of the scenarios are medium-sized, with a few small scenarios thrown in.  There are no large scenarios and none that use the full extent of the historical map.  Several of the scenarios have relatively “exotic” special rules, such as having all German units undergo a pre-scenario Heat of Battle DR.

Like other early HOB releases, the campaign game in Fortress Cassino is based on the rules from Kampfgruppe Peiper II and Red Barricades (which thus are needed in order to play the FC campaign).   The campaign game was HOB’s longest published to that time, at 22 campaign dates. 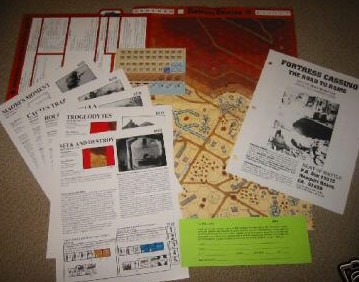