The Friendly Fire Pack 1 (FF1) was a small pack of tournament-sized scenariös most of which were originally designed for use at the Friendly Fire ASL tournament in Linköping, Sweden (one scenariö was used in the 2003 tournament, while five others were used in the 2005 tournament; the remaining two were apparently designed for the scenariö pack itself). The scenariös were designed by Mattias Rönnblom and Martin Svärd. Because the Friendly Fire ASL Tournament is a rather small affair (only 16 players in 2005), the pack’s practical, as opposed to technical, debut was shortly thereafter at ASL Oktoberfest (ASLOK), the world’s largest ASL convention, held each year in Cleveland, Ohio. A number of Scandinavians attended, including Rönnblom, and they brought the scenariö pack with them, where it was met with considerable fanfare. That week, Friendly Fire scenariös were highly visible among the ASLers gathered in Cleveland.

The Friendly Fire pack is quite well done. Technically, it is in “color,” although the only places where colors appear are underneath counters (as per official artwork) and in national flags (one wonders why they didn’t go all the way and color the counters as well). Although the pack is of Swedish origin, all the text is in English, and the editing, punctuation, grammar, spelling, and syntax is superior to the majority of ASL products published in the United States. In the Schwerpunkt tradition, historical sources are offered for each scenariö as well. The physical presentation is quite impressive.

In general, the scenariös are quite good. Several feature interesting situations or fun units. FrF2 (Maczek Fire Brigade), for example, is a fun Polish-German early war armor clash (the novelty value has helped make it the most popular Friendly Fire scenariö). One of the most fun scenariös is FrF8 (Second Thoughts), which pits a determined SS force against a not always determined US attack. Despite its small size, there are options for both sides and the scenariö is quite replayable.

Overall, the pack is of high quality and a worthy addition to any ASL collection. 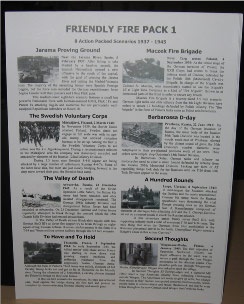