After a year off to recharge their batteries, Friendly Fire reemerged into the ASL world in 2013 with a new scenario pack, Friendly Fire Pack 8.  As is inevitably the case with a Friendly fire pack, FFP8 contains 8 scenarios, making up in quality what it may lack in quantity (more ASL publishers should consider this).  It is a selfish pleasure to be able to say that the quality of this latest pack is up to Friendly Fire’s usual high standards–which essentially means that in terms of pure scenario quality, this is probably the best ASL product released in 2013.

The scenario situations are, as usual, varied, although the PTO is sadly entirely left out.  Actions depicted include Norway 1940, Finland 1941, Soviet Union (1941, 1943), Italy (1943, 1945 [2]), and Germany 1945.  The scenarios are almost all small or medium in size, with one scenario perhaps just barely squeaking into large, on account of the number of vehicles.  Essentially, though, all of these scenarios are playable in a reasonable time, which is understandable for a pack that makes its international debuts at tournaments.  No scenarios use OBA, Night Rules, or Air Support, which make many of them good for beginners, with the caveat that Friendly Fire scenarios are balanced with experienced players in mind.

The scenarios collectively use boards 4, 8, 34, 41, 46, 51, 53, 62, 64, 65, 4a, q, and FrFA.  Two scenarios use this last board, which was published by Friendly Fire itself in Friendly Fire Pack 6.  One scenario, FrF63 (Maximum), uses a unique counter for a Soviet AA gun, the 4M.  Purchasers at ASLOK and presumably Linköping were given a handmade version of this counter, but these are not likely to appear in copies purchased over the Internet.

The scenario that may prove the most popular is FrF66 (Between the Devil and the Deep Blue Sea), which depicts a German attack on a Soviet-held hill town.  The Germans  do not have much of an advantage in force over the Soviets, but the Soviets must set up to defend an attack from several possible directions and against two (divergent) potential objectives.   The first objective is, essentially, the town square, and most scenarios will primarily feature combat over this objective.  The second objective, some distance away but still reachable by the Germans, is an isolated building.  Even German threats at this building may detour Soviet reinforcements away from the town itself.  Many playings of this scenario will go down to the wire, which, combined with its East Front theme, is what will probably make it popular.  Another East Front scenario, FrF64 (No Time to Bleed), which is more vehicle heavy (and the meatiest scenario in the pack), may also prove popular.

FrF61 (Make Way for the King) has novelty because it features the rarely appearing Norwegians.  It features a German defensive stand on the little hill on map 4a against Norwegians from every direction.  It has essentially the same dynamics as the Schwerpunkt scenario SP210 (Tea at Three) released the previous year, but seems less dicey and perhaps more balanced.

One other scenario, FrF67 (Collecchio), may also have some novelty value, as it is only the second published scenario to feature the Brazilians (A67 [Monte Costello], was the first).  The Brazilians sent a division-sized Expeditionary Force to fight in World War II.  Poorly trained, it was sent where the Allies sent all their second- and third-rate units, to Italy, where it spent most of its time simply holding the line (one reason why so few scenarios feature this unit).  However, in this scenario, designers Peter Struijf and Chris Mazzei for some reason chose to represent this low quality unit with elite and 1st line American squads (In Monte Castello, it more properly is represented by 2nd line squads). 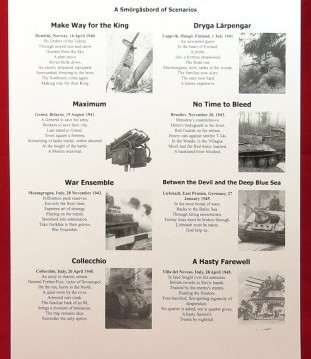