Afrika Korps-Hellfire Pass and Beyond (AK-HPB) is the 11th in Critical Hit’s Afrika Korps 12-part series of scenario packs, all of them converted from its ATS tactical game system. Ownership of both Afrika Korps-El Alamein and Afrika Korps-Battle of Gazala is required to play the scenarios in this pack; thus it costs $144 to play a single scenario in this pack.

Several of the scenarios feature special rules to represent prominent people on the battlefield. Overall, though, the scenarios are SSR-light. Several of the scenarios look interesting. One is AK85 (The Pastor’s Punch), which depicts part of the action at Hellfire Pass in June 1941, when a British attack against commanding German anti-tank defenses ended in defeat. This scenario pits 18.5 elite British squads, accompanied by 10 AFVs, in an attack against 10.5 elite German squads, assisted by 4 AFVs and 5 guns, including 2 of the dreaded 88mm Flak guns. AK91 (Ed Duda Knights) is an interesting small Night action, featuring a New Zealand infantry attack against an Italian Bersaglieri position. 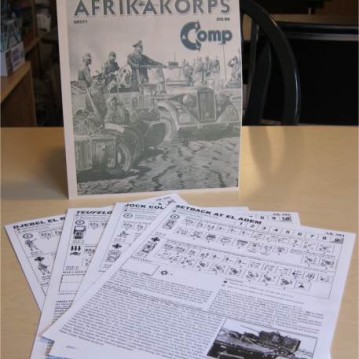