A large, attractively-produced French-language downloadable wargaming magazine, Frog of War was born as an idea on a French on-line wargaming forum, Strategikon.  Edited by Jean-Michel Constancias, it contains reviews, strategy articles, scenarios and variants for a variety of games.  A couple of issues have included an ASL scenario.  Though the magazine itself is in French, the scenarios have been in English and French (but not both).  The magazine only published four issues, more or less annually, from 2004 to 2007. 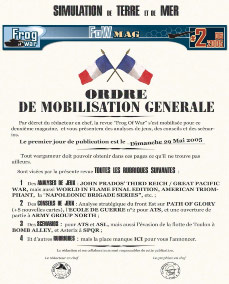