Home > Products > From the Cellar Pack 2

From the Cellar appears again, three years after its first incarnation.  Like its predecessor, From the Cellar Pack 2 is a scenario pack containing “leftover” scenarios from issues of Le Franc Tireur.  LFT editor Xavier Vitry explains that there are always a number of “extra” scenarios that don’t make the cut into LFT; one hopes that these are simply scenarios that were late in development, and not scenarios that somehow did not measure up in quality.

Most of the scenarios are small or medium in size.  However, one of them, FT73 (The Adriatic Pirates), is considerably more meaty.  Featuring a Yugoslav partisan counterattack against an SS/Croatian force invading a partisan-held Adriatic island, the scenario pits 50 (!) partisan squads against 16 elite and first line Croatian squads and 20 SS squads (which enter via assault rafts).

A number of other scenarios also feature interesting situations.  FT69 (Durs A Cuire) features a combined arms French force trying to get past a German blocking force in distressingly open terrain.  FT70 (Ride Across the Caucasus) uses the difficult terrain of Board 47 in a way no other scenario has tried before.  Most scenarios using this board feature and assault across the width of the board; this scenario, however, sandwiches a 10-squad strong Soviet force in between a Slovakian force and a German force, each attacking along a narrow side of the board towards the Soviets in the middle!  The Germans/Slovaks need the balance in this one.

Fans of the Heat of Battle High Ground! geomorphic boards will be pleased by FT72 (Catcher Caught), which uses HOB boards I and II in a valley configuration.

Overall, the scenario mix, both in terms of subject and size, is quite good.  The scenarios themselves are printed in full color on glossy cardstock using “official” artwork.

Perhaps the most balanced scenario in the pack is FT71 (The Last Circle), a tournament sized East Front action pitting 16 Soviet squads and 5 AFVs against 8 defending German squads, an AT gun, and 2 AFVs.  It is a straightforward, “no frills” scenario.  Unfortunately, and not atypical for Le Franc Tireur at this stage, a number of the other scenarios seem somewhat unbalanced. 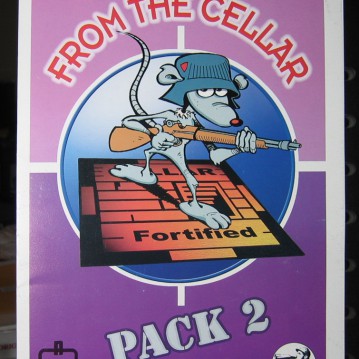