Home > Products > From the Cellar Pack 3

The origins of the project date back several years.  Holst, who developed a fascination for the Waffen SS, had long lobbied for the black-colored Waffen SS counters that appeared in A Bridge Too Far to be reprinted.  Eventually, he decided he would unilaterally reprint them on his own, without permission, and embarked on an “SS project” that would combine the bootleg black SS countersheets with scenarios of his own design featuring SS soldiers in action.

Only two days later, Holst made a subsequent announcement that he had come to an arrangement with French third party publisher Le Franc Tireur to publish his SS scenarios.  In the end, LFT published 7 of his scenarios, plus 3 more of their own design, and printed a small countersheet that included some of the “rare” vehicles, as well as other odds and ends (see below), but did not duplicate any of the counters from the original ABTF.  “Back in Black” thus became, more or less, From the Cellar Pack 3, an SS-themed scenario pack.  As such it joins the 8 or so other previously published Waffen SS themed scenario packs, as well as the 10+ historical modules that feature the Waffen SS as one of the main combatants.  In other words, it enters an already crowded field.

Only 8 of the 10 scenarios are “original.”  Two of them–FT104 (Flying the Flag of Poland) and FT105 (Smashing into Vlasotince)–were first published by Critical Hit as The Walking Dead (EP92) and A Vicious Melee (TAP7).  According to lFT editor Xavier Vitry, who was unfairly placed in the embarrassing position of having to explain and apologize for this fact, the scenarios that Holst submitted to LFT included a number of scenarios that had previously been published elsewhere or had been submitted elsewhere.  Holst allegedly told LFT that they could publish them regardless.  LFT refused and tried to identify and remove previously published scenarios from the scenario mix (substituting original scenarios of their own design to fill the gaps), but two snuck through despite their good faith efforts.  Why Holst decided to submit scenarios which had already been published remains a mystery, but it must have been a great irritation for LFT.

The scenarios are printed in full-color on “standard” glossy LFT scenario cards (A4 sized, not North American sized).  The printing is crisp and colorful (although the Axis Minor color is rendered too close to that of the U.S.) and the scenario cards are very attractive–far more so than “official” scenario cards published by MMP.  However, because of the white on black printing for the SS units on the scenario cards, some of the vehicle designations are a bit hard to read.  The scenario cards feature the divisional insignia for the different SS units depicted in the scenarios, a perhaps unfortunate decision since several of those insignia are now common neo-Nazi symbols.

The 10 included scenarios represent a wide range of actions across Europe and across the years of World War II.  As such, they represent a good mix of scenario situations and combatants (with the proviso, of course, that the SS always appear!).  Situations include France 1940, Soviet Union 1941, Yugoslavia 1943, France 1944, Poland 1944 (2 scenarios, one vs. Soviets and one vs. the partisans of the Polish Home Army), Yugoslavia 1944 (vs. Bulgarians), Hungary 1944, Belgium (Bulge) 1945, and Vienna 1945.

A number of the scenarios have interesting features.  Two of the scenarios make alternate use of HASL maps. FT99 (The Doomed “Tirailleurs”), a nicely tournament-sized scenario pitting early war SS against Senegalese troops fighting for France, uses part of the map from Pegasus Bridge (and is a more interesting scenario than most of those that actually come with the Pegasus Bridge module).  The terrain on the map, full of hedges and walls, creates interesting tactical puzzles for the SS, whose armored cars are key to victory.

FT107 (Race at Longchamps) uses part of the LaGleize map from Kampfgruppe Peiper to depict an SS attack on American positions elsewhere in the Bulge.  FT100 (Hajra!), named after a Hungarian battle cry, pits SS and Hungarian attackers (including cavalry) against entrenched Soviet defenders in an early East Front action that uses maps that actually make it seem as if it really were set on the East Front.  A third scenario, FT106 (Counterattack Along the Danube), makes use of ASL Starter Kit maps (maps w and z).  This scenario is a large and intense “heavy metal” urban warfare clash set in Budapest in December 1944; it depicts a seesaw action between Hungarian and SS troops against well armed Soviets.  Fans of large city fighting scenarios will flock to it.

FT102 (The Bulge), a smallish SS vs. American action (ironically, set not during the Battle of the Bulge but in Normandy), could be a popular tournament scenario if it proves balanced (2014 note:  it did become a popular tournament scenario, and is is unbalanced in favor of the Germans).  FT105 (Smashing into Vlasotince) allows the Bulgarian player to choose part of his OB from several options.

Two of the scenarios feature partisans, always a welcome event (partisans are quite under-covered in ASL) but in both scenarios the partisan forces are peculiarly (and ahistorically) depicted.  FT101 (Fire and Ice) arms 1943 Yugoslav communist partisans with Soviet and Axis Minor weapons, of which they had none (their arms at that point were more Italian than anything else).  It is one of the balanced scenarios in the pack. FT104 (Flying the Flag of Poland) features fighting in the Warsaw suburb of Wola at the beginning of the Warsaw Uprising.  The second time Scott Holst has designed a scenario on this action–a natural choice for scenario designers, as the Poles had two captured Panther tanks–it features some unusual choices.  The Polish Home Army is represented with Axis minor forces (4-4-7s and 3-4-7s) loaded with support weapons (and artillery pieces!) rather than as the relatively poorly armed partisan force it actually was (although it does accurately give them a PIAT).

That scenario also depicts the Dirlewanger Brigade as a more effective fighting force than this 2nd rate unit with no discipline actually was.  Another scenario, FT108 (The Damned Die Hard) also does this same overestimating of the SS and underestimating of its opponents to a certain degree.  However, in general, the scenarios do not try to depict the SS as supermen but rather show the varying qualities of different units and of the SS at different times in the war.

Oddly, the scenarios are all subjected to two additional SSRs which are not printed on any scenario card, but instead announced on the inside of the product cover:  1) Kindling is not allowed and 2) Vehicular Crews may not voluntarily their vehicles.  Players should take note, as they are otherwise likely to forget that these SSRs even exist.

As with previous LFT counters, the counters here are well done, duplicating “official” ASL counter artwork styles.  Only a few of the counters are truly “new” to the system; these are counters representing various French, Italian, and Soviet AFVs pressed into German service.  The countersheet provides 32 such vehicles in “black SS” colors, as well as 8 (French) vehicles in standard German blue colors.  The remaining counters are basically chrome, although the 3 single Panzerfaust counters and the 8 burning wreck counters will be useful to some.  Also included are 8 blue and 6 black colored TCA counters (for those ASLers who cannot abide white TCA counters, presumably), and 23 “named” black SS SMC counters (for those ASLers who had to have names on their black SS SMC counters).

The counters are accompanied by a double-sided page of vehicle notes (actually, a bit more than a page, as there is overflow printed on the inside cover of the product) that provide historical background to the vehicles included on the countersheet (not really done in ASL format).

Those ASLers who are fixated on the Waffen SS probably have already rushed to buy this product.  For others, there may be more of a decision involved.  The physical quality of this product is quite high, and the scenarios look interesting (though of course only time will tell for sure).  However, given the poor 2008 dollar to Euro exchange rate, American buyers are faced with a price (including shipping) of over $45, even assuming they purchase it within the U.S.  That admittedly is a lot for a scenario pack, even a good one.  Each individual will no doubt have to decide how much of a “lure” this product is to them personally. 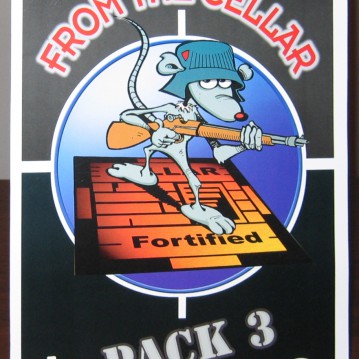