Home > Products > From the Cellar Pack 7

Several of the scenarios look interesting.  FT170 (The Road to Juniville) depicts a rather swirling battle as a small German combined arms force must pound on a similar French force and exit; it will certainly appeal to fans of “tin can” battles. So far it seems balanced and fun.  So too does FT171 (Getting Your Bell Rung), a British-German Normandy action.

If balanced, the American vs German FT172 (Clearing the LZ) could be a nice little tournament scenario in the tradition of some of the early General tournament scenarios.  Both sides get to attack and defend and there are just enough toys to make things interesting.  FT175 (Dover Bunker) is nice because it gives players an opportunity to play on the St. Nazaire historical map (a very attractive map) without players needing to know all of the complex rules required to play the St. Nazaire module itself.

FT176 (Inter-Allied Attack) is a nicely-sized tournament scenario in which a combined-arms British commando force (which includes AVREs) have to assault a German-held village on Walcheren Island.  Both players get a small amount of choice in their OB, while the random Rubble aspect changes the complexion of each playing of the scenario.

Overall, most of the scenarios are good scenario concepts, neither mundane nor too chromey.  This is one of the better From the Cellar packs. 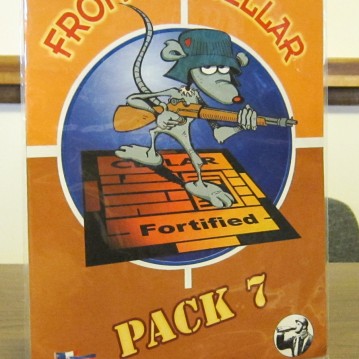