This specific offering, one of the German dice in the series, is a black die with white pips.  The 1-facing contains a red (foil) and white depiction of the German World War II military symbol for the 6th Army, the higher German formation most associated with the battle for Stalingrad (and which was surrounded and capitulated during that battle).

The 2- and 3- facings also have a small red foil ROF symbol on them, to help players remember ROF.  However, the red does not show up that well against the black background of the die.

The other two German-oriented dice in this series are both white, which gives this mini-set two white and one colored die, rather than dice of three different colors, which is more useful from a practical standpoint.

Overall, it is attractive. 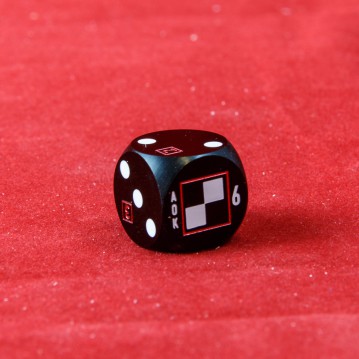