Certainly, the Operation Overlord collection, of which the die here constitutes one of its six sets, has virtually no connection to ASL. They are not tied to any particular ASL products; though one unit represented by a die in one of the sets (not this one) has an ASL product based on it, this seems to be coincidental. The white dice in the sets essentially have no connection, by themselves, to ASL.  The black dice in the series, such as this set, which consists of a die representing the German 7th Army, have a slight practical ASL connection, in that they contain Rate of Fire symbols.

The complete collection consists of four sets of two white dice each.  Two sets each feature a U.S. unit that fought in Normandy; two sets each feature a German unit that fought in Normandy.  The collection also contains two sets of one black die each (to be used as the colored die in ASL DR).  One features a “higher level” U.S. command, the 1st U.S. Army; the other set–this one–features a German command, the German 7th Army.

The die in this set is a 5/8″ (16mm) ball-cornered precision die, black with white pips.  In lieu of the 1-facing, the die has a gold foil square containing a circle containing a triangle containing the number 7. Under this collection of polygons are the initials AOK, which stands for Armeeoberkommando, which was how the Germans referred to their army-level commands.  Tiny (too tiny and hard to see) Rate of Fire emblems appear on the 2- and 3-facings. 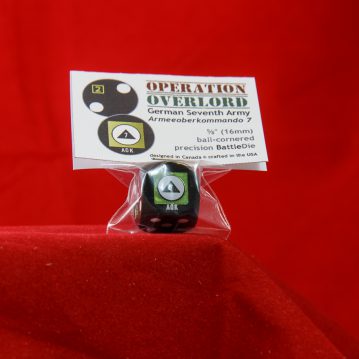