Home > Products > Gettysburg: Into the Wheatfield

Gettysburg: Into the Wheatfield (hereinafter ITW) is an expansion module for Gettysburg: Turning Point: 1863 (GTP), which is Critical Hit’s misguided attempt to use ASL rules to simulate tactical combat from the American Civil War. It was released simultaneously with GTP itself.  Another expansion, Devil’s Den, was released at the same time.

ITW continues GTP’s attempt to portray small slices of the battle of Gettysburg, featuring 6 scenarios that take place around the infamous wheatfield of Daniel Sickles on July 2, 1863.  Ownership of GTP is required, as is ownership of Devil’s Den; this module is not self-contained.

ITW uses four 12″ x 18″ glossy light cardstock/heavy paper map panels that must be assembled to create the Devil’s Den portion of the Gettysburg battlefield.  The graphics are the same as GTP, but the size of the hexes is considerably different, which also means that it will never be possible to assemble a grand Gettysburg battlefield from the various CWASL maps.  It is not clear why a different hex size was used; Critical Hit was typically defiant about the decision.  The map contains particularly atrocious wheat terrain.

The one countersheet, simply a duplicate of that included in Devil’s Den, simply contains more Union and Confederate squads and SMC of the exact same varieties as GTP.

ITW includes a 20-turn monster scenario, ITW12 (The Last Attack), that combines the maps from Devil’s Den and Into the Wheatfield.  However, Critical Hit apparently did not include enough counters to actually play the scenario, because the scenario card states that the size of units was reduced “to make this scenario more playable” and that “players may purchase additional counter sheets and double the squad type for each unit.”

2nd Edition (“Retro Map 2nd Edition”) Comments:  In 2015, only a short time after the publication of ITW, Critical Hit announced a 2nd Edition of the module, complete with $10 price hike, in which the only significant difference seems to be the substitution of ASL geoboard-style artwork for the artwork of the 1st Edition.  It is not at all clear why this occurred, although–unlike the other modules–the wheatfield artwork in this module is so irritating that it is understandable why someone might want an alternative. However, there may have also been a falling out with the original artist, which necessitated a re-do of the artwork so that new modules would have artwork compatible with the old.  In any case, the new artwork is, overall, better than the original artwork. 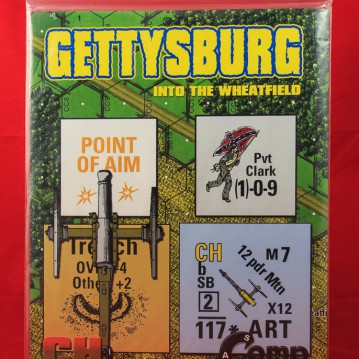