Gettysburg: Pickett’s Charge (hereinafter PC) is the latest in Critical Hit’s unsuccessful attempt at simulating tactical American Civil War warfare using a modified version of ASL’s World War II tactical warfare rules.  Desperation Morale discussed this attempt extensively in its write-up of the first such module, and it is assumed that anybody reading this write-up will have already read that one (HINT).

PC requires ownership of Gettysburg: Turning Point AND its Culp’s Hill module AND its Devil’s Den and Into the Wheatfield Modules.  In other words, the ownership requirements/cost investment is steep, indeed.

It uses 9 12″ x 18″ unmounted (heavy paper) glossy map panels, which must be constructed to form the battlefield, which depicts Seminary Ridge and Cemetery Ridge.  It uses the so-called “retro” map style of the 2nd edition Gettysburg modules.

Six scenarios are provided, five of which use only a tiny map area.

The sixth, of course, is the eponymous Pickett’s Charge.  Readers may wonder how such a massive military event is represented on such a small scale here and the answer, of course, is that it isn’t, not really.  The module itself admits that the action was too large but promises to give “some small ‘feel’ for the event.”  What that means is that this monster scenario is more of an abstract or symbolic scenario rather than any attempt to actually simulate Pickett’s Charge. 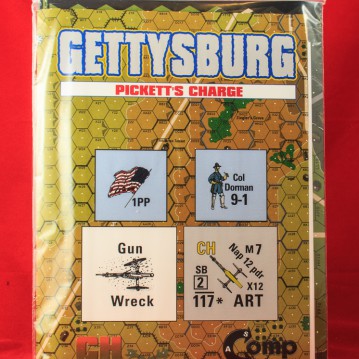