Home > Products > God Save the King

V2.0: As above, with rules revisions.  Either this version or 3.0 may have included rules with holes punched in the margins

V3.0: As above, with rules revisions.

V4.0: New larger mapsheet instead of several small ones.  Hexes now numbered in "standard" ASL style rather than earlier versions that numbered hexes from 0101 to 0121 and 2801 to 2820

God Save the King (GStK), the first release from Heat of Battle, is a modest-sized historical module concentrating on the fight for the north end of Arnhem Bridge in September 1944 during Operation Market-Garden (made famous by the movie “A Bridge Too Far”).  It is one of three historical ASL modules on the subject (the other two being Arnhem:  The Third Bridge, from Critical Hit, and A Bridge Too Far, from MMP).  Because MMP’s A Bridge Too Far was released at the same time as its module Blood Reef: Tarawa, which was based on a Heat of Battle design, some have assumed that A Bridge Too Far was similarly based on GStK.  However, the MMP game used a different map and had a different focus than GStK.  Heat of Battle did play a role in the later game, providing information and feedback to its designer and contributing two of its scenarios.  In that sense, a little bit of GStK does show up in A Bridge Too Far.

GStK is somewhat crude by today’s standards, but it should be considered in perspective.  It was not only the first release by a new company (whose principals had never designed or published a game before), but it was also the first historical map module for ASL released by any third party publisher.  In this sense, it was definitely a pioneer.

Keeping that in mind, many ASLers will find GStK’s counterparts from Critical Hit and MMP (see above) more attractive to play; GStK perhaps has more value as a collector’s item today, although it is certainly playable (particularly scenario GStK1, Going to School).  The production values are crude.  The original version was essentially a DTP attempt; the map came in four page-sized sections that had to be cut out and assembled in order to form the complete game map.  The artwork was serviceable but not remarkable.  The map depicts a smaller area than the other Arnhem modules, with fighting concentrated around the bridge itself.

The rulebook featured nice touches such as detailed designer’s endnotes.  The campaign game essentially uses rules from Red Barricades with changes (such as an interesting block-to-block movement system between campaign dates) to reflect the nature of the Arnhem terrain and combat.  Of the 7 scenarios, 4 are small (some quite small) and 2 are medium-sized, while GSTK7 (Raus!) is pretty large and is the only scenario that uses the entire historical map.

The initial version of GStK was replete with errors.  The scenario errata was corrected easily, but the issues surrounding the other rules, including campaign game rules, needed more working out.  The GSTK rules went through three different versions.  The fourth version of the game replaced the original map with a new map on a single mapsheet that made it look less amateurish.  People wishing to obtain this product should try to get a copy with the final version of the map if possible.

The revision history of the game, so far as it can be pieced together, is as follows:

Although the scenario cards look attractive, much of the rest of the module has a decidedly amateurish feel.  Nowhere is this more apparent than in the language, editing, spelling, and proofreading.  All text is filled with sloppy errors (from grammatical errors to spelling errors to punctuation errors).  Even on the label on the game envelope the word “Arnhem” is misspelled (as “Arnheim”), as are “Alemein” [sic] and “compadable” [sic].  The historical text contains some real whoppers, such as the notion that Barnard [sic] Montgomery used the U.S. First Army to clear the Scheldt estuary and approaches to Antwerp (it was nowhere near there and Montgomery did not command it).  Luckily, Heat of Battle has since improved on its historical accuracy, although grammar, editing and proofreading remain a problem for the small company.

Compared to Heat of Battle’s own products today, GStK seems crude and quaint.  This just illustrates the strides that Heat of Battle has made since then.  GStK was a pioneering effort and paved the way for a number of subsequent historical projects by a variety of third party ASL publishers.

Some counters for GStK later appeared in Heat of Battle’s module Berlin: Red Vengeance.  A chapter divider was later made available for purchase by Heat of Battle.  The Hell on Wheels scenario pack by Bounding Fire Productions contained a “bonus” scenario for GStK (Premature Evaluation). 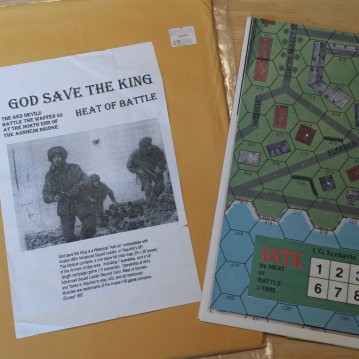