This product, the umpteenth jillionth churned out by “Wild Bill” Wilder in 2009 alone, is the first of an announced 3-part series of scenarios featuring USMC AFVs in World War II.  It focuses on Guadalcanal and New Georgia in 1942-43.   Counters include “KIA” counters (dead bodies), a Japanese prisoner counter, various leader counters, “Jungle Hazards” counters, 4-5-8 USMC counters and 5-5-9 USMC Raider/Para counters with assault fire, spraying fire, 3 smoke exponent, and underlined morale.  Apparently, these were created for those few ASLers who thought that USMC as represented in ASL were not supermanny enough. 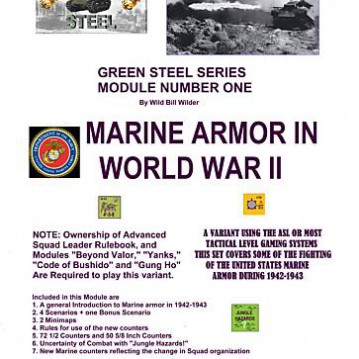