Before George Kelln finished his Leibstandarte series, he began another series featuring an elite German unit (although at least it wasn’t Waffen SS), the Grossdeutschland (which started as a regiment but eventually became corps-sized).  Grossdeutschland Pack 1 (GD1) features 8 scenarios depicting its early actions in Belgium and France in 1940 and the Soviet Union in 1941-42 (despite the title of the scenario pack).

The Grossdeutschland is the attacker in 6 of the 8 scenarios.  The scenarios tend towards the large, although there is a reasonable mix:  2 small scenarios, 2 medium scenarios, and 4 large scenarios.  Several of the scenarios are suitable for tournaments.  One of the more interesting situations, GD5 (Machorka), is a half-board meeting engagement in which 12.5 German squads must stop 25 Soviet squads from exiting off the map.  Though large, it ought to play quickly.

Three of the scenarios have OBA (including one scenario which has both a pre-game Bombardment and a Creeping Barrage).  There are no scenarios that use the Night rules or have Air Support.

This is a decent Lone Canuck scenario pack, with a number of interesting scenarios, including GD2 (Operation Niwi, a good tournament scenario that needs German balance), GD1 (La Guerre Finie!), and GD4 (The Road to Lyon).  That last one may be the best scenario in the pack. 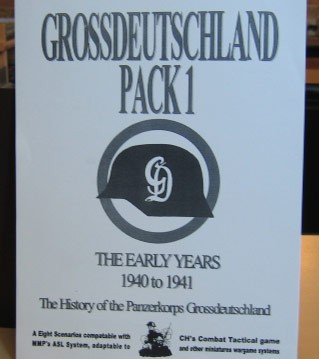