The Guards Armoured and British Airborne dice are a 2-dice set in Battleschool’s “Operation Market Garden” series of custom precison dice for ASL.  All dice in this series are 5/8″ (16mm) ball-cornered custom precision dice that have their 1-facing replaced with a symbol associated with a unit that fought in the Market-Garden operation.

The first die in this set is the Guards Armoured die, a dark blue die that uses red foil to display a Guards Armoured Division symbol on the 1-facing.  The 2- and 3- facings have hard-to-read ROF symbols on them, theoretically to make it easier to remember rate of fire.  Despite the ROF symbols, it is an attractive die.

The British Airborne die is red with a silver foil emblem on the 1-facing. It has the words “Red Devils” and a winged pegasus emblem, but it is not clear if this die is actually supposed to represent the British 1st Airborne Division or to act as a more generic “parachute infantry” die for the British.  In any case, it is attractive. 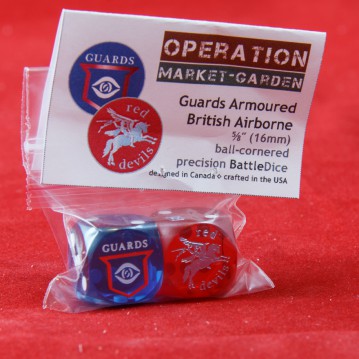