Spanish Fury (to use the one of its three titles that has the largest type) is a historical module. Like most latter-day Critical Hit ASL compatible products, it was designed originally for the ATS rules system (by Devin Heinle), then converted to ASL rules by Dave Lamb. Its 8 scenarios depict actions along the Volkhov River in the northern Soviet Union where the Spanish 250th “Blue” Division fought its first notable actions. The “Blue” Division is a unit that many wargamers fixate on, and ASLers have been no exception; Spanish Fury is the second major ASL release in as many years to feature this Axis unit.

The two (non-contiguous) maps feature areas alongside the Volkhov River. The smaller “Volkhov” mapsheet features a hill along a bend in the river. The larger and far more interesting “Russa/Sitno” map, 36″ long, depicts a long stretch of the Volkhov River featuring towns on each end separated by a region dominated by gullies, woods, and a few small hills. The maps are fairly bland. Four scenarios are set on each map. Oddly, no scenarios use the entire Volkhov map, but three scenarios use the entire larger Russa/Sitno map.

The module also includes 160 counters consisting of 2 sets of 80 (each set in 2 small sheets for 4 total). Although the marketing material on the back of Spanish Fury claims twice that there are 192 counters (in two sets of 96) and once that there are 224 counters, in actual fact, only 160 counters come with the game. These are all Spanish infantry counters (squads, half squads, leaders, and heroes), which are depicted in a two-tone (grey on blue) fashion. It is not clear why this is the case, as the units are identical to (and treated the same as) German units, and there are no scenarios featuring non-Blau units. It would seem that none of the counters are necessary to play any of the scenarios (the marketing material seems to suggest that Boat and Wagon counters are also included, but none were included in the copy used for this overview).

Half of the scenarios are large in size, with the other half small or medium-sized. Overall, there is a good mix. Typically, the scenarios have few SSRs and are pretty straightforward, although a couple of scenarios limit the ability of Soviet units to move and fight. Three scenarios have OBA, one uses Night Rules, and two scenarios use Boats. The scenarios that will probably seem most interesting to many ASLers are the ones that use the entire Russa/Sitno map, as they can create some interesting tactical situations. SF6 (Fire on the Volkhov), for example, forces the Spanish player to control buildings in each of the two widely separated villages, creating two separate battles on the same map. SF7 (Liquidate the Bridgehead?) allows the Soviet player to choose one of three victory conditions, each of which will determine where on the map his main emphasis will be.

2nd Edition (Spanish Blue Division) comments:  In 2015, Critical Hit came out with a new edition of this product, renamed Spanish Blue Division (SBD).  As Critical Hit typically recycles its products about every three years, the fact that so much time had passed between editions of this product may mean that it failed to excite much interest on the part of the ASL public on the first go around.

SBD is basically the original product with a facelift.  The historical maps have new artwork and no longer have any grainfields (out of season).  The artwork is mostly okay, with one major exception:  the maps use the same building graphics that CH uses on its recent unmounted geoboards.  This is a problem because whenever such buildings are oriented on the map in anything other than a purely vertical or horizontal orientation, their graphic depictions become messed up and they appear crude and pixelated.  Critical Hit has shown no interest in fixing this vexing problem.  The maps now appear on 12″ x 18″ glossy heavy paper panels (2 for one map, 1 for the other).

The rules and scenario cards also have a new look, which is generally an improvement.  There is still a rules problem in the module, with the rules referring to the 848th Infantry Division and giving it several penalties.  There was no such actual unit, but there was a 267th Rifle Division, of which the 848th Rifle Regiment was one of its sub-units.  So does the rule refer to the whole division, the regiment only, or something else?  The world wonders.

The counters–totally superfluous, in any case–also get a new look, with Blue Division units represented as two-toned–German blue on the outside, Axis minor green on the inside.

At $69.95, the Spanish Blue Division is ridiculously-overpriced for a small product with only 8 scenarios.  There is no reason to purchase this product unless you have a serious man-crush on the Blue Division.

It should be noted that Critical Hit has come up with a way to entice you to spend EVEN MORE on the product, offering an “alternative” set of maps that are done in Critical Hit’s “winterized” style.  These maps cost $29.95 and are a real con, as Ground Snow is only present in a single scenario!  Don’t waste your money. 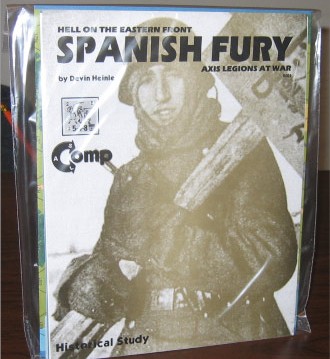