Designed by Dave Lamb, Hell’s Bridgehead (HB) depicts the attempt by the 3rd SS Totenkopf Panzer Division to seize and hold a bridgehead across the Psel River, defended by the 95th Guards Rifle Division (and reinforced by units of the 5th Guards Tank Army), during the battle of Kursk in July 1943.  As such, it was, surprisingly, the only East Front historical ASL module that didn’t take place in Stalingrad or Berlin to be published until the 2003 release of Onslaught to Orsha by Heat of Battle.

HB has a fascinating geography.  The southern portion of the map features the gorge of the Psel River and the village of Krasny Oktabyr, while the rest of the map is dominated by the depressingly (especially for the attacker) open terrain of south-central Russia.  Unfortunately, the map’s coloring is very gray and depressing.  Its monochromatic nature also doesn’t make obvious some of the drastic elevation changes.  HB also contains a countersheet, most of which consists of SS counters already depicted in the system (there are also some “tank ramming” counters).

The first scenario, HB1 (Psel River Line) depicts a contested river crossing by SS assault engineers.  Most of the remaining 5 scenarios take place in the more open areas of the map, where cover is scarce and lines of sight are long.  HB6 (Clash of Titans) is a massive armored slugfest that ranges across the entire map.   Most of the scenarios are fun and balanced.

Overall, Hell’s Bridgehead is a quality historical modules.  All ASL fans of East Front action should consider getting it.

Critical Hit Magazine Volume 6 Number 4 focuses on Kursk and Hell’s Bridgehead.  It includes a new HB campaign game, which links the first two campaigns into a “mega” campaign game; it also includes new optional rules.  It features as well two new scenarios set on a new historical map depicting terrain near the map included in HB.  It also has an AAR by Kurt Martin of a playtest of CG1 in HB and various tactical tips for playing the module.

Upgrade Kit:  In 2005, Critical Hit released an upgrade kit, which featured a new historical map (slightly larger and with slightly larger hexes, but more importantly, more distinctively colored) and two new HB scenarios (plus one unrelated “freebie” scenario given away at the ASL Oktoberfest tournament in 2005).   Anybody who likes HB should definitely purchase the upgrade kit.

Hell’s Bridgehead, 3rd Edition:  In 2011, Critical Hit released a third edition of Hell’s Bridgehead.  This edition contains the revised 2005 map, with no changes.  It includes 9 scenarios, plus two reprints of previously printed (and unrelated) scenarios, the latter apparently there only to “sweeten the deal.”  One comes with a small mini-map, the “Tin Pan Hill” map.  Also included are new versions of the Waffen SS counters that appeared in the original edition; these contain the new counter artwork and layout that appears on Critical Hit counters since late 2010.  The layout is much superior to that used with earlier CH products.  However, as almost every counter provided here simply duplicates official counters, these sheets provide little practical added value.  The Waffen SS counters are printed on black, a questionable decision apparently designed solely to appeal to those who think it is “cool” for the SS to have their own color scheme.  What is oddly completely missing from the 3rd Edition are the campaign games that appeared in the original module.  For players who have the Hell’s Bridgehead upgrade kit (which, combined with the original, is a de facto 2nd edition), there is not much reason to obtain the 3rd Edition.  For ASLers who don’t have any previous edition, this is a chance to get one of the better CH historical modules, albeit one with the campaign games stripped from it.

Note, April 2011, 3rd Edition Hell’s Bridgehead map:  Naturally, three different editions was not complicated enough for CH.  Not long after the release of Hell’s Bridgehead, 3rd Edition, Critical Hit released a new map (apparently because it ran out of the leftover 2nd edition maps it had been using for its 3rd edition).  The map is essentially the same as the 2nd edition map, with a slightly different color palette and a few additional slopes thrown in.  People who already have the 2nd edition map do not at all need to get this map.  Apparently to sweeten the deal and get people to do just that, however, the release of the 3rd Edition map came with two “bonus” scenarios, HB Bonus #3 (Belt Fed Drive) and HB Bonus #4 (Militia Pushback).   These two scenarios are played on a provided “maplet” dubbed “ST1”–essentially a stand-alone overlay 6 hexes by 8 hexes in size. 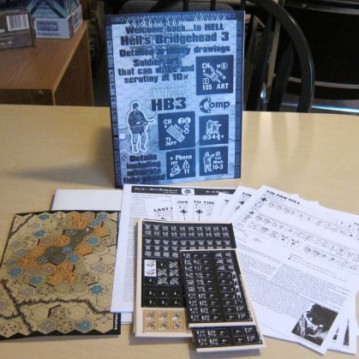