Hell’s Highway is the latest magnum shootus from Lone Canuck Publishing, the fourth in their series of small historical modules, each of which typically features a single campaign game and four or so scenarios (Hell’s Highway has five).  These modules are attractive to purchasers because of their interesting historical maps and their manageably-sized campaign games.

On September 22, a German thrust by the 107th Panzer Brigade cut the supply line at the village of Mariaheide, as part of a larger attack.  Over the next day and a half, fierce fighting occurred as the Americans (101st Airborne Division) and British (various units) attempted to restore their supply lines.  They were successful, but the delay caused by the German thrust played a role in insuring that Arnhem would end up being a “bridge too far.”

The key component of HH is its historical map, over which all the fighting will occur.  As with previous Lone Canuck HASLs, the map is well done, though too dark.  The map depicts the village of Mariaheide and its surroundings, which consist largely of hedge- and orchard-edged fields.  Except for buildings, the entire map is set on a single elevation level, which makes it less complicated than historical maps with complicated hills and valleys.  Barbed-wire fences find their way in, as do two types of partial orchards.  Plowed fields, which co-exist with in-season fields, have their own distinctive artwork (very drab and brown).  There is no complex terrain in the module and players can start playing scenarios immediately, or need only master the campaign-specific rules to play that part of the module.

HH is the first Lone Canuck release to contain counters, though it provides a very modest 22 of them.  They come pre-cut, not on counter-trees, which suggests that they were lasercut.  They seem well done.  They consist of non-generic Typhoon fighter bomber counters (continuing the faddish trend among third party publishers of providing specific plane counters), armed with rockets, a substantial number of one model of German halftrack, and a few Sherman OP tanks.  Nothing really to get excited about, but it is nice to see Lone Canuck step up their production game a bit.

The campaign game or “Tactical Mission” is a five-date campaign.  Lone Canuck suggests that it “lends itself well to team play, with separate players for American and British forces.” HH uses the standard Lone Canuck campaign game rules, which are derivative of official rules.  The campaign game depicts the initial German attack on Mariaheide as well as the subsequent Allied counterattacks.  There is no Night fighting.  Both sides get a limited range of reinforcement groups from which to choose, with the German options being more limited than the Allied options, but there are still enough toys to go around, especially as the fighting involved infantry and armor on both sides.

HH, as with other Lone Canuck HASLs, is all about the campaign game.  The module comes with only 5 scenarios and 4 of the five are very tiny.  HH1 (A Fine Spot for Tea), for example, features 4.5 American squads and three British AA guns against three German squads, 4 halftracks, and 3 Panthers.  It is only 4.5 turns long.  The other scenarios are similarly small.  The only scenario that–barely–manages a little substantiality is HH5 (Needed Elsewhere), which pits 13 Allied squads and 9 AFVs against 8 German squads, one Gun, and 6 AFVs.

Really, the only option for meaty play on the historical map is to play the campaign game, which makes HH of limited appeal to those who do not care for campaign games or do not have the time or space for them (although this is by no means a Red Barricades in size/length).  However, for fans of HASL-style campaign games, Hell’s Highway is a nice little nugget. 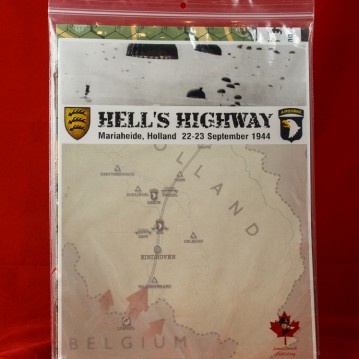