Another Battleschool custom ASL die debuting at ASLOK 2011 was the “heretical rate of fire” die.  This is a die designed to be played with an ASL “house rule,” though it can also be used in normal play as a colored die designed to help a player notice that he has maintained ROF.

The “heretical” use is to use the die not as the colored die but as a third die.  With this house rule, the ROF number is derived independently from the two dice used to determine the IFT or To Hit result.  The reason this house rule came about is because of complaints that, because ROF numbers are low (1, 2, or 3, depending), this produced an “insult added to injury” effect in the game whereby a deadly low DR would also likely maintain ROF, thus making it more likely that even more harm would result.  Having ROF depend on a third, independent die can make ROF tears less deadly and scenario-destroying.  At least, that is the rationale behind it.

The die is a nice enough die, but it is an unfortunate example of form over function.  The images and phrases totally dominate the custom die facings, leaving the ROF box tiny and insignificant.  Players will have to peer at it even to find out what number is showing.  Other prototypes for this design had a much more prominent number; it is unfortunate that this is what was chosen for the final product.  As a result, it cannot really be recommended for practical play.

2015 Note: In 2015, Battleschool released a new version of the die.  The new version is a white die (rather than black, as in the original).  It has three blank facings, a green foil 1 ROF facing, a blue foil 2 ROF facing, and a red foil 3 ROF facing. The use of a white die makes things a bit easier to read, but the ROF box still needs to be larger, especially considering there are no pips on this die. 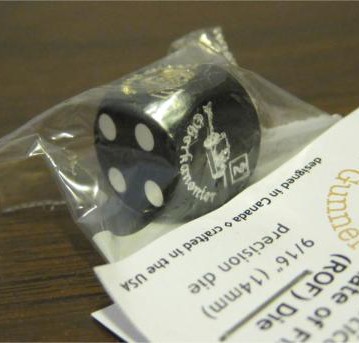