After a series of essentially disappointing scenario packs, Critical Hit surprised the ASL world in 2002 with this quality release. Inexpensively priced, the pack had 8 scenarios (all designed by Ray Tapio) with no other frills included. All of the scenarios were small in size, designed for tournament play, and each one featured at least one hero in the order of battle (thus the name of the series). The scenarios all featured American (or, on one case, Free French) vs. German action, set on the borders of France and Germany in the tough fighting in the fall and early winter of 1944.

What was such a pleasant surprise about the scenario pack was that all of the scenarios were fun to play–quick moving and reasonably replayable. The tournament favorite, HP3 (Rimling Round Up), is only four turns long (and features two German heavy tank destroyers with 128L guns!). However, HP4 (French Toast) and HP5 (Rudder’s Keystone) are also fun–though the Germans might need the balance for HP4.  HP2 (Lousy Crossroads) is also a good choice. One of the most replayable and fun is HP7 (Ripple Effect), which has multiple options for attacker and defender.

This should belong in the collection of every ASL player.  It is good value for the money.

2nd Edition (Heroes 1: Hürtgen to Bulge) Comments: In 2017, Critical Hit renamed and re-released the four Hero Pax products under new names. The contents are the same–8 scenarios each, although Critical Hit claims that “all known errata [is] input, and freshend [sic] up with the artwork that we’ve had commissioned in the interim, plus other color flourishes.” 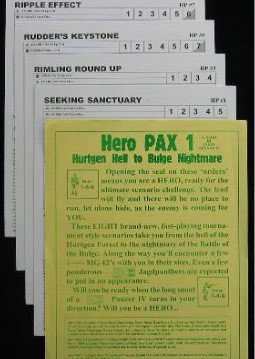