Critical Hit is well known for starting series of scenario packs that never actually number more than one, but happily, it followed up the fun Hero Pax 1 with an East Front sequel, Hero Pax 2.  Unlike the first pack, whose scenarios were all designed by Ray Tapio, Hero Pax 2 featured scenarios mostly designed by Dave Lamb, with a couple of guest designers thrown in.

Like the first Hero Pax, the second focused on small, tournament sized scenarios, each one including a hero counter.  A few of the scenarios aren’t very successful, and overall the scenarios are not as well balanced as in their predecessor, but the pack contains some good scenarios, especially HP12 (Kicked Autz) and HP13 (Radio Wars), as well as a scenario likely to be considered a classic (though a bit scripted) scenario, HP15 (Moldavian Massacre), designed by Glenn Houseman.

2nd Edition (Heroes 2: The Maelstrom) Comments: In 2017, Critical Hit renamed and re-released the four Hero Pax products under new names. The contents are the same–8 scenarios each, although Critical Hit claims that “all known errata [is] input, and freshend [sic] up with the artwork that we’ve had commissioned in the interim, plus other color flourishes.” 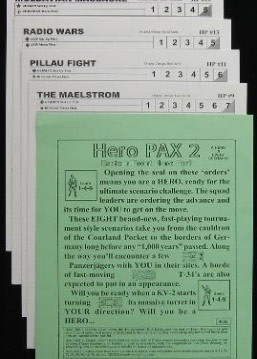