The third Hero Pax offering, Hero Pax 3 takes the concept of no-frills, fast-moving, tournament-sized scenarios (each featuring a hero) to the Pacific.

Fun scenarios in this pack include HP17 (Down Radio Road), which is a classic, HP22 (Luzon Lunatics), and HP21 (Loose on Luzon), among others.

Like its predecessors, Hero Pax 3 is a good value and well worth trying.

2nd Edition (Heroes 3: Java to Luzon) Comments: In 2017, Critical Hit renamed and re-released the four Hero Pax products under new names. The contents are the same–8 scenarios each, although Critical Hit claims that “all known errata [is] input, and freshend [sic] up with the artwork that we’ve had commissioned in the interim, plus other color flourishes.” 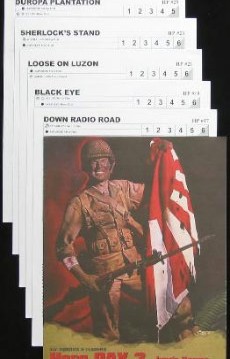