Hill 609: Tunisia 1943 is an interesting historical module published by Critical Hit in 2018 on a rare ASL subject:  Americans in Tunisia in 1942-43.  Specifically, this module covers the (successful) attempt by the 34th Infantry Division to capture Hill 609–a strategic hill in northeast Tunisia the German possession of which hindered the advance of multiple American visions–from a regiment of German paratroopers in late April 1943.  The Americans took the hill and held it against German counterattacks, a nice–though not uncostly–victory for the rookie Americans against an elite German unit.

The module continues Critical Hit’s near-monopoly on ASL desert-related products.  On the one hand, it is, we suppose, good that someone is paying attention to the desert.  On the other hand, it is a shame that it is Critical Hit, with its long history of quality control issues (to give just one, luckily inconsequential example from this product, the back of the product erroneously refers to the map of a different product than Hill 609).

The most prominent feature of Hill 609 is its large historical map, which must be assembled by players from 9 glossy 12″ x 18″ heavy paper/light cardstock map panels. These panels provide bright, crisp artwork, but are a pain to assemble when they come in large numbers, as here.  Luckily, not all of the scenarios use the entire map.  The map itself depicts the large hill mass of Hill 609, aka Djebel Tahent, a large round knob of a hill with a secondary outcropping to the south. It also depicts some of the surrounding, lower terrain, festooned with fields, olive groves, crags, and other cartographic bric-a-brac.

The map artwork is good and attractive, though several of the terrain levels are rendered in an odd (yet not unpleasing) lime green palette. Slopes are everywhere, although Critical Hit provides simplified “Slope Light” rules for them. It’s the sort of map that makes you want to use it.

Hill 609 comes with a relatively small 4 pages of rules, some of which clarify map terrain, including decreeing Chapter F rules, so there is Scrub, Hammada, Olive Groves, Cactus Patches, and the like. Other rules provide for Blockhouses and a host of rules that Critical Hit seems to throw into many or most of its historical modules now, including “Handi Talkies,” “Bangalore Torpedoes,” “Bayonet Charges” (cribbed from the old Kinetic Energy rule), “Marching Fire” (also cribbed from Kinetic Energy), and “Cargo Trailers” (an optional rule that Critical Hit loves to throw in that will never be used).

The module also includes rules for U.S. Tank Liaison as well as off-map HMG positions.  A grudge rule (also included by Critical Hit in other recent products) forces MMG/HMG to be manned by Crews.

The biggest single section of rules, though, is a very strange addition.  Dubbed “New OBA Rules,” these rules (almost one and a half pages worth) supersede standard Chapter C rules.  Critical Hit claims that these rules “provide a more realistic presentation of the use of artillery fire missions in the theater of war of North Africa.” In these rules, players secretly record, pre-scenario, locations of artillery registration, concentrations and barrages.  These can (more or less) be triggered if enemy units end their MPh in them. There are various other rules (including for On-Board OBA).  The big question, given the publisher, is whether or not these rules were adequately developed or, shall we dare say it, playtested.  Needless to say, no designers, developers or playtesters are given any credit in the module.

Hill 609 comes with 8 scenarios, almost all of which utilize a large portion of the historical map or all of it. Seven of the eight scenarios are large–or really large–and only one scenario could be considered medium-sized. There are no scenarios–not even close to one.  Every single scenario also has OBA, so if you are not a fan of OBA, this is definitely not the module for you.  One scenario uses Air Support rules; no scenario uses Night rules (one scenario does take place at night, but this is only simulated by a +2 LV hindrance throughout the scenario). Many of the scenarios have extensive fortifications as well.

Three scenarios use the entire map area and are particularly large scenarios. These include H609-5 (In Situ), depicting a major American attack on the hill using 52 squads plus loose change. It may be one of the largest infantry-only ASL scenarios in publication.  H609-6 (Corps Day) is a 16-turn scenario featuring another major American attack on German fortified positions on the hill. In this effort, the Americans get 51 squads and desiderata, plus a half-dozen Shermans.

One feature of these scenarios worth noting is that the designer is very generous with American squad quality levels, given that the actions here took place in the spring of 1943. Elite and first-line U.S. squads certainly greatly outnumber 2nd-line squads.

The monster scenario, which takes the place of any campaign game, is H609-8 (The Road to Mateur), a 25-turn scenario. The defending Germans have 30 squads, 11 leaders, 8 guns, tons of OBA, and lots of fortifications, plus up to 30 possible German reinforcement squads (it gets complicated).  The attacking Americans have 49 squads, hordes of miscellaneous, their own OBA, 10 tanks, and up to 18 squads of optional reinforcements. Most of the American squads have a quality level that is determined randomly, although the scenario rules are unfortunately rather vague on how many rolls are required (one per group or one per each squad in a group?).

Hill 609 comes with three countersheets, few of which are actually required by this module (except perhaps as extra counters for really large scenarios).  One countersheet is a U.S. Infantry/SW countersheet in non-standard dark (olive) green, making these counters not all that interchangeable with official U.S. counters.  The second sheet is another sheet of 1/2″ counters, this time a German Infantry/SW sheet.  Once more the counters are of a non-standard color, in this case the color that Critical Hit thinks is Feldgrau.

The product also comes with two half-sheets of 5/8″ counters (each with 88 counters).  One half-sheet contains nothing but 5/8″ U.S. concealment counters. Unfortunately, they are colored in standard U.S. green rather than the darker olive green that all other American counters in this product have, so their usefulness is very debatable.  The second half-sheet provides Olive American and Feldgrau German vehicles, planes and guns.

Hill 609 comes with a nice map and an intriguing setting.  Unfortunately, the fact that the scenarios are all so large and OBA-intensive may be a turn off for some (though perhaps an attraction to others). The real question, as for any modern Critical Hit product, is whether or not the scenarios and rules here have been adequately developed and playtested–or whether purchasers will themselves be the alpha and beta testers. 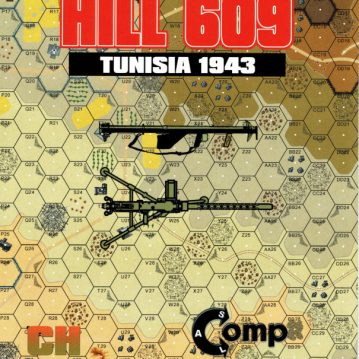