Hill of Blood (HoB) is a historical module depicting the scene of some of the fiercest fighting during the battle for the city of Stalingrad:  the struggle to control the Mamayev Kurgan, a strategically placed hill in the city.   ASLers seeing the name “Stalingrad” may expect that HoB is yet another module set in a dense urban area, but this is far from the case.  The Mamayev Kurgan (which means, basically, “Burial Mound of Mamai”) was said to be originally an old Tartar burial mound.  The large, low hill, at the outskirts of the city (just north of the area depicted in Valor of the Guards), commanded a wide view of the entire area and was thus fiercely fought for during the entire struggle for the city (today, the Mamayev Kurgan is the site of the famous Stalingrad memorial).

Although a large number of recent Critical Hit historical modules feature a map consisting primarily of a single large hill feature (making them all seem a bit similar), HoB may command more interest because of the Stalingrad connection.  The map is overall reasonably well done, loosely based on aerial photos of the area.  The Mamayev Kurgan is depicted as a 5-level hill, which may possibly give ASLers an impression that it was higher than it actually was (only around 100 meters or so).  The size of the map is in a relative “sweet spot,” not too large for those players with space issues nor too small for players who like to have a fair amount of terrain.  Players will want to make sure that lighting is good, as there are a lot of brown on brown features on the map.

The countersheet consists of duplicates of counters already in the official ASL countermix; as long as one had Valor of the Guards (for a few NKVD MMC), there would be no real need to punch the counters here.  They do provide some Axis minor counters with a Croatian emblem on them, for people who don’t want to use generic Axis Minors counters.  One of the AFVs depicted on the countersheet is the very mysterious Pz IIIIN, which must have been a secret German weapon, much better than the Pz IIIN.

There are no extensive special rules for the module, just a few simple rules to clarify terrain issues.  One interesting special rule is that MGs operated by crews do not require a leader to direct fire at more than 16-hex ranges, nor do they cower.

The bulk of the rulebook actually deals with the Platoon Leader campaign game, Hill of Blood.  This CG, according to its designer, was a last-minute inclusion and was not playtested (described in the rulebook thusly:  “The bonus CG included was designed using a deductive methodology instead of traditional counter-pushing.”), so beware! and enter into the CG with eyes open.  The CG is 5 dates long, making it manageable in size and suitable as an introduction to Platoon Leader CGs.

The module comes with 15 scenarios, all but one of which use only a portion of the map, typically the map center (where the hilltop is) to one of the board edges.  The scenarios are mostly large in size.   About 2 scenarios are small and 3 more medium-sized; the remaining 10 are large to very large.  One of the scenarios uses Night rules.  The vast majority of them have moderate to extensive fortifications.  The module is also very OBA-heavy; 9 of the 15 scenarios have OBA, often more than one module of it.  Moreover, many of the scenarios have various “one time only” OBA provisions or bombardments.  Additionally, half of the scenarios include Air Support (usually German, sometimes Soviet).  The combination of the fortifications, OBA, and Air Support make the module not very friendly to beginners; this is basically a module for veteran ASLers.

The Germans are the attackers in the majority of the scenarios, but the Soviets get to attack often enough that it is not too one-sided.  The victory conditions for most (though not all) of the scenarios involve control of various Level 4 hill hexes.  The large scenario that uses the whole map is HoB7 (Under Shell and Bomb), which depicts a major German assault on Mamayev Kurgan.  The Germans have 42 squads (20 of them elite, including 7 assault engineers), as well as 6 guns and 10 AFVs.  They also have a 10-3 leader and two 9-2 leaders, 21 MG, 11 DC, and 4 FT (plus two modules of OBA, some one-time rocket OBA, and three dive bombers).  The Soviets have 49 squads (27 of them elite), 8 guns, and 6 AFVs, in addition to 2 commissars, a 10-2 leader and two 9-2 leaders, 13 MG, and some OBA of their own.

Hill of Blood, because of the “heavy” nature of many of its scenarios, is not for everybody.  In all likelihood, the people who may like Hill of Blood the most are probably fans of Bounding Fire Production products, because the HoB scenarios are certainly of that “type,” by and large.  Obviously, the Stalingrad aspect has appeal, though the non-urban nature of the fighting will appeal to some and turn off others (who may have their own vision of what Stalingrad fighting “should” be like).  The campaign game, even if unplaytested, also adds appeal to those ASLers who do most of their gaming in the form of campaign games.  Based on the description here, players ought to be able to determine if they are the sort of people for whom this product would have appeal.

2nd Edition (i.e., Mamayev Kurgan II) comments:  Mamayev Kurgan II, released only a year after the original product release, is more of a reprint of the original than it is a true second edition, although there are differences.  The map is the same, and it has the same scenarios and campaign game.  The only things different are the rules–which are the same, but reformatted into a set of color rules with three-hole punches in them (which is admittedly more attractive)–and the counters, which are the same style, but appear in only about half the amount of the original (most are just duplicates of existing counters, in any case).   The other difference is that it appears to be less expensive than the original, so although the differences between the two are essentially cosmetic, the 2nd edition might be the better one to purchase.  For owners of the original Mamayev Kurgan, there is absolutely no reason to purchase this edition.

3rd Edition (To the Volga 2: Mamayev Kurgan) comments:  In 2018, Critical Hit announced an ambitious new venture, claiming it would release a series of modules on Stalingrad that would collectively reproduce all the city fighting there at the squad-level.  Critical Hit series have a record of going uncompleted, so it remains to be seen how many modules in the “To the Volga” series are ever published, but as of this writing, Critical Hit has published two such modules, both accomplished by revamping previously existing Stalingrad-related products with new artwork.  The first of these was To the Volga 1: Battle of the Tractor Works, which was simply yet another version of old The Dzerhezinsky Tractor Works module.  To the Volga 2: Mamayev Kurgan is the second, a similar reworking of Critical Hit’s previously published material on that battle.  It should be noted that this product, designed by David Lamb with a map from Larry Winslow, actually was playtested, unlike most Critical Hit products published later (note: the included Platoon Leader campaign game was not, however, playtested), which makes it more worth getting than most Critical Hit products.

In most respects, this is a straight reprinting of the previous versions of Mamayev Kurgan; the major difference is that it contains completely new art, based on the look selected for the “To the Volga” series.  The artwork for To the Volga 2 is nice, better than the previous artwork (which wasn’t actually bad).  The vibe the artwork gives is quite different than the original, because Red Barricades-styled orange hues replaces the green aesthetic of the original (overall, not a bad decision).  The new artwork is crisp with nice attention to detail.  It simply redoes the original artwork, though, and does not extent the map area to the Volga, which would have been a good idea. The map is formed by assembling 6 glossy 12″ x 18″ heavy paper/light cardstock map panels.

The rules and scenarios are basically as in previous versions of the product (a couple of the scenarios are marked v1.1, suggesting some errata has been incorporated), but there are no counters provided here (they were not actually needed in previous editions, so this is no real loss).  At $99.95, however, this product is not at all cheap.

At the same time that Critical Hit released this product, it also released–for separate purchase–a host of alternate map sets: 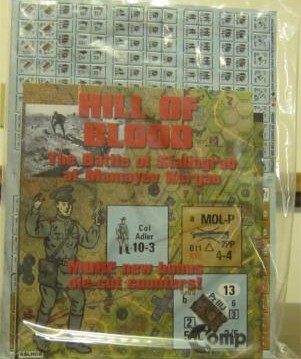 To the Volga 2, image courtesy of Noble Knight Games