Hürtgen Surprise is a port to ASL rules of two small ATS modules.  In addition to the eponymously named mini-module, which deals with actions fought in December 1944 by Company E, 330th Infantry Regiment, 83rd Infantry Division on the fringes of the Hürtgen Forest near the town of Strass, the product also includes a mini-module called Brécourt Manor that features an action of the 101st Airborne Division at Normandy depicted in the mini-series Band of Brothers.   In a typical example of Critical Hit’s consistency problems, the two sets of scenarios use different layout styles.

Both feature smallish historical maps; the Manor map in particular depicts a small playing area (only 11 hexes by 15 hexes), using a large hex size.  Both maps are very green, featuring mostly open terrain and woods or brush (with hedgerows for the Manor), with nothing remarkable or unusual about them.  The terrain in both could have been approximated pretty well with geomorphic maps.

The Strass mini-module comes with 4 scenarios; the Manor mini-module adds 2 more.  Presumably to make more use of the Manor map, Critical Hit threw in two somewhat dubious “bonus” scenarios, which were previously published scenarios [BM3 (Normandy Nights) is derived from CH24 (Those Normandy Nights) from Critical Hit magazine; it is not clear what BM4 (Advance on  Beach Exit 2) is derived from].  Obviously, for these scenarios, the map is not “historical.”

The included counters are not required for play and consist of 1 small countersheet of American infantry and 1 small countersheet of vehicles and guns, some of which appear in some of the scenarios and some of which seem random.  Two copies of each countersheet are provided.  Because Critical Hit provided no play aid explaining their alternative, non-intuitive counter artwork (which is especially inscrutable for vehicles), players who do not have such a play aid from some other Critical Hit product will find the counters relatively worthless.

The scenarios are generally small (sometimes very small).  The largest is HS2 (Returning the Favor), which pits 16 German squads and one AFV against 12 American squads and one AFV.  Two scenarios have OBA, one is essentially all armor (plus a half squad), and one is a night Air Drop scenario.

Overall, this is not a very exciting product.  Perhaps fanatic Band of Brothers fans may wish to get it in order to be able to replicate via ASL the famous “attack on the guns” depicted in the mini-series, but otherwise its allure is limited.

2nd Edition (i.e., Brécourt Manor + Strass) Comments:  Five years ago, Critical Hit published Hürtgen Surprise, a minor product that was not released to any acclaim and has received very little play since its release.  Ordinarily, this would not be the sort of product that a game company would reprint, but Critical Hit has a business model which is dependent on reprinting and recycling all of its products as much as possible.  For all intents and purposes, Critical Hit only has two product lines:  its line of ASL-compatible products and its ATS line, a competing tactical gaming system.  Critical Hit creates both ASL and ATS versions of almost all of its designs, so it can get maximum value out of the same printed maps.  Critical Hit also sometimes skimps on playtesting and development, as many players have discovered over the years.  But even so, Critical Hit cannot typically release enough new products each year to sustain the company.  This causes Critical Hit to release, re-release and release yet again its previously published items.  Scenarios get recycled repeatedly, maps get recycled repeatedly–the products all get printed again and again, sometimes with real improvements, sometimes with cosmetic improvements, sometimes with little “improvement” at all.  Moreover, names of scenarios and modules are changed, so that retailers and customers can never be sure if they are purchasing a product for the first time or merely repurchasing it.  It would seem, at least, that Critical Hit must believe that the only way it can survive as a full-time game company is by constantly repainting and reprinting its old catalog.  This is how an unimpressive product such as Hürtgen Surprise somehow gets a reprint.

The new edition, Brécourt Manor + Strass (BMS), doesn’t have much to commend it over the earlier edition.  The larger map, the Strass map, is the same map as in the first edition.  The Manor map is different.  It is now rendered as a 12″ x 18″ map (and printed on light cardstock instead of paper).  Unfortunately, CH did not pay to have the map folded in half.  It is one large, flat map, which makes it much larger and more awkward to store than any other official or unofficial ASL products–unless the user folds it himself.  Players should be warned that, unfolded, this map is susceptible to being bent.  Moreover, the use of this nonfolded map also apparently necessitated Critical Hit abandoning a ziplock bag for storage, simply encasing it in shrinkwrap instead.  This means that, after opening the product, ASLers will not be able to store the product in its original packaging unless they carefully cut a slit open in the shrinkwrap to preserve it.  Critical Hit clearly needed to fold the map.  For what it’s worth, the artwork on the new map is better than that in the original.

The countermix is slightly different, as its its artwork, but the counters are all gratuitous, anyway, being merely duplicates of already existing counters.  One sheet features American infantry, marked with 82nd and 101st Airborne Division insignia, while a partial sheet features some American and German AFVs and Guns.

For owners of the original, there is no real reason to get the new version.  For people who do not own the original, this is not one of the most exciting ASL products around.  The first edition can still be found for less than $20, half the cost of the pretty expensive 2nd edition ($39.95). 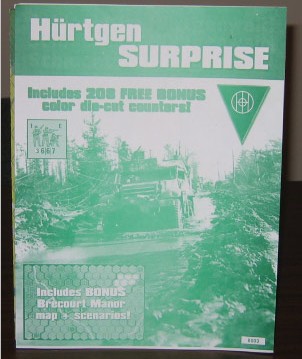