ASLers Bill Conner, Daryl Burke and Pierce Ostrander founded the “ASL Players Association” in 1989 and created for it an ASL newsletter, In Contact, which debuted at Origins in the summer of 1989.

In Contact was very possibly the first newsletter published specifically for ASL (On All Fronts predated it, but started as a Squad Leader newsletter and continued to have Squad Leader content for a number of years).  Its big draw was new scenarios–lots of them–which were quite rare in those early days.  Altogether, In Contact published 12 scenarios (all of which were reprinted as official ASL scenarios many years later in MMP’s Out of the Attic), including several that were well-received, notably IC11 (Monty’s Mess) and IC12 (Crocodile Rock), although none of them were classics.

Though extremely short lived, In Contact paved the way for a host of newsletters that would shortly follow, including the Rout Report, Fire for Effect, At the Point, ASLUG, and more. 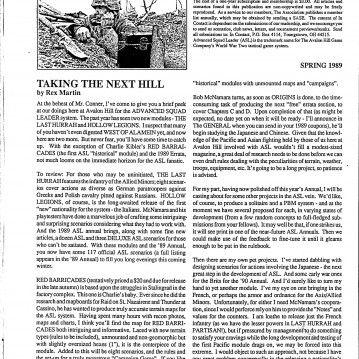