Just when you thought you were out, they pull you back in.  Battleschool’s “Nationality” series of dice began as a simple way to produce 1/2″ (12.5mm) custom precision dice representing the different nationalities of ASL. so that if you were playing the Americans in a scenario, you could use a special “American” die.  However, the series continued long past the realm of practicality and into the realm of sheer endlessness, with dice being produced for nationalities that barely fought, like Yugoslavia (which collapsed almost immediately).

That is essentially what the latest die in the series is, a custom die just for the re-formed Italian Army that fought (more or less) with the Allies after the surrender of Fascist Italy in September 1943.  By this time, Italy was simply war-weary to the bone and, while Italian partisans put up a spirited resistance in the German-occupied north, the part of Italy occupied by the Allies was simply tired of war and in no mood to volunteer for more–especially for the morally bankrupt Badoglio regime.  The result was that only a relative few Italians ever joined up, perhaps around 20,000 or so, and even these were not exactly enthusiastic soldiers.  They ended up being among a number of third-rate troops used by the Allies in Italy merely to hold sections of the line.

The number of ASL scenarios–if there are any at all–based on these troops must be tiny indeed, far too small to make a custom die even remotely worthwhile.  That places this die wholly in the hands of completists who simply cannot control themselves. 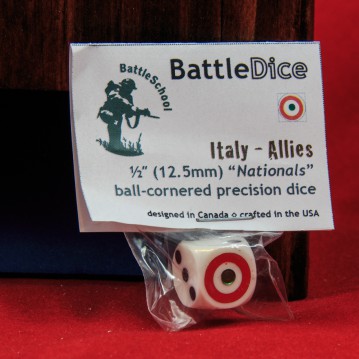