Iwo Jima:  Valley of Death (IJVOD) is a small historical module on part of the battle for Iwo Jima in February-March 1945, released at the same time as Critical Hit re-released Uncommon Valor in a new edition as Iwo Jima: Motoyama Airfield #2.  When Uncommon Valor was originally released, it was supposed to be the first of a three-part series of Iwo Jima modules, but the subsequent two never saw print.  IJVOD is not one of those two missing modules.  Though it uses an artwork style similar to the other Iwo module released at the same time, the two are not connected–indeed, not only do their maps not connect, but they don’t even have the same hex size.  It is likely that this module was released in order to capitalize on MMP’s release of Rising Sun, the new PTO core module.

IWVOD sells for $39.95, which is cheaper than most other recent Critical Hit products, but still overpriced.  To provide a comparison, one can take any recent issue of Against the Odds, a small-press wargaming magazine.  A typical issue of Against the Odds features a 22″ x 34″ map, 200 or so counters, a 14 pages or so of rules and charts, and an entire magazine–for around $29.95 for an individual issue.  IJVOD contains a much smaller map, fewer counters, fewer combined rules/scenario pages, and no magazine, yet costs 25% more.  While at one time, Critical Hit had pretty reasonable prices for a small game publishing company, those days are long gone.

The main feature of IWVOD is the small map of a new map style that debuted in a number of Critical Hit reprints in 2013.  This style discards the old folded matte heavy paper maps in favor of smaller (12″ x 18″) unfolded glossy light cardstock maps.   This new map style is already becoming controversial.  Although it probably has a cost advantage for Critical Hit, the sole advantage to the player is that maps on this paper seem a bit brighter (which is a good thing).  There are several items on the down side, however.  First, the maps are unfolded, which means that this product comes in a huge shrinkwrap instead of a resealable ziplock baggie, so players will have to find some other way to store the product.  Also, unless they fold the map themselves, they will find the product large and awkward to store.  The glossy finish means that the map suffers from reflective glare.  Most irritating is that almost all of these maps released so far have not come cut — they have a white border around their edges.  Thus the maps typically have to be cut out like overlays in order to be played upon.  Luckily, IWVOD uses only one such map, so players can leave the white border on if they don’t want to bother cutting the map.

The map is drab, but that’s the nature of Iwo Jima.  Given the situation, the map palette is not bad.  The map depicts a Level 4 Hill (but no visible valley, which is a bid odd, given the module’s title) and the surrounding terrain.  The map is strewn with crags, brush, shellholes, and debris.  It is rather small, being only 15 hexes x 20 hexes.  That, combined with the nature of the terrain, suggests there may not be a ton of movement in the scenarios.

IWVOD was designed by Ray Tapio.    The included rules are for the most part simple.  The one exception are the rules for USMC Aerial Rockets.  Irritating grudge rules require that the USMC use crews for MMG/HMG, Bazookas, and Light Mortars.

The module comes with 8 scenarios; there is no campaign game.  No playtesters were listed, which should always be a warning sign for any Critical Hit product.  The scenarios are fairly evenly divided between small, medium, and large in size.  One of the large scenarios, IWVOD #8 (Hill 362A) is a massive 20-turn scenario that uses the entire map.  Six of the scenarios feature extensive fortifications (pillboxes, entrenchments, mines, wire, etc.).  One of the scenarios uses Night Rules, while two scenarios utilize Air Support Rules.

Every single scenario uses OBA.  Actually, that may be too weak a statement.  Every single scenario has at least TWO forms of OBA in it, and many have more than that (not to mention the frequent pre-game Bombardments).  For example, in IWVOD #3 (Ronson Time), a tiny scenario that features 3.5 USMC squad-equivalents and 4 crews attacking 3 Japanese squads and one crew, the USMC have a pre-game Naval Bombardment and a module of 60mm OBA (with an automatic black chit draw).  The Japanese, meanwhile, get an off-board 330mm Spigot Mortar to fire.  In IWVOD #2 (The Bloody View of Nishi Ridge), a medium-sized scenario, the USMC get a Fighter-Bomber with Napalm, a pre-game Naval Bombardment, a module of 60mm OBA and a module of 80mm OBA, while the Japanese receive a module of 80mm OBA, a module of 100mm OBA, and that off-board 330mm Spigot Mortar.   This module is not for those people who do not love tons of artillery.

One thing that one might expect to be present in an Iwo Jima module is caves, but caves are virtually absent from IWVOD.  In fact, a total of one cave appears in the whole module–even though scenario historical descriptions frequently indicate caves were involved.  Apparently, Ray Tapio just decided in the interest of playability to do away with caves almost altogether.  It may perhaps make them more playable, but subtracting caves from Iwo Jima is a bit like subtracting all the tanks from Kursk.

The counters are nothing special.  One sheet of 140 1/2″ counters is simply a USMC infantry sheet with extra USMC SMC/MMC.  They are all duplicates of existing counters except for a few crews.  The partial sheet of 32 5/8″ counters consists mostly of duplicate American AFVs, plus 4 Japanese naval guns.  Two of the U.S. counters were accidentally misprinted in Japanese colors, “giving” the Japanese a halftrack and a tank dozer.  The Critical Hit website claims that a sheet of 140 Japanese counters also comes with the game, but none came with the copy purchased.  Often, Critical Hit gets the components wrong for its own games on its website and marketing text, but it could also be an all-too-typical Critical Hit packing error as well.  Your guess as to what particular way Critical Hit messed up is as good as anybody’s.

It is hard to be very enthusiastic about this product.  The scenarios are rather idiosyncratic (plus it is not clear to what degree they were playtested) and the components are nothing to write home about.  Fans of the USMC may want to try it, regardless.

2nd Edition (Iwo Jima Deluxe) comments:  It was inevitable that this product would be recycled, renamed and re-released, as that is Critical Hit’s business model, and so it came to pass.  In 2016, Critical Hit renamed the product Iwo Jima Deluxe and it is pretty much the same product with one huge exception:  the map is blown up to NINE times its original size, with hexes now actually larger than DASL hexes.  What was originally was a smallish, playable historical map product is now an ungainly beast that won’t even fit on many gaming tables.  Moreover, the artwork is blown up a bit past what is sustainable, so some of the art, such as gullies, is rather blurry.

Incidentally, the product never makes clear if this is just a product with big-ass hexes or if it is actually supposed to be played with DASL rules (for example, hand-to-hand combat). 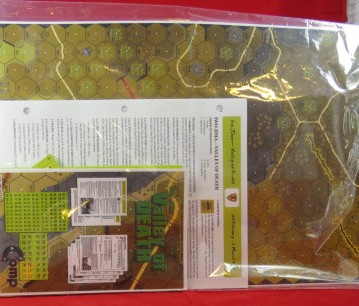