In 2011, Le Franc Tireur published Kampfgruppe Scherer, an East Front HASL focusing on the battles for Cholm that became highly regarded for its production values (it has not had very many recorded playings on the ROAR website, but that is not atypical for third-party HASLs).  With two high-quality maps (featuring the same terrain, but one snow-covered and “winterized,” the other not), campaign games, and numerous scenarios, it was clearly a labor of love.

Still, it is a little surprising that, seven years later, Le Franc Tireur would release a Player’s Guide dedicated to Kampfgruppe Scherer (hereinafter KGS), not least because it is only of interest to people who already own, or are considering purchasing, KGS, but also because such player’s guides dedicated to specific ASL products are very rare to begin with.  It was a pleasant surprise, however, to those fans of KGS, who now not only could read articles related to their beloved module, but also get a bevy of new scenarios to play.

The guide consists primarily of a 60-page color magazine with a look and layout very similar to Le Franc Tireur’s other products. That’s a rather substantial product, with a lot to read. Though the guide oddly contains no table of contents, it includes: 1) a brief introduction from LFT guru Xavier Vitry, 2) a second introduction by Andrew Hershey, the designer of KGS (who takes a mild veiled swipe at your Humble Author, but wadya gonna do), 3) an extremely lengthy terrain and scenario analysis of scenario KGS2 (Their Fate Sealed), the monster scenario in the module, by Carl Noguierra, 4) Brief, uncredited analyses of 4 other KGS scenarios, 5) a black-and-white elevation change movement play aid, 6) a strategy article by Jim Brackin on KGS’s two campaign games, 7) a replay of a Cholm campaign game between Xavier Vitry and Frederic Rocheteau, with Jim Brackin offering neutral comments, 8) the charts and tables for the accompanying SASL mission (see below; the mission itself is printed on a scenario card); and 8) a KGS play aid detailing the specific hexes that comprise each “block” on the playing area, which players can consult in case of confusion.

Overall, it is quite a mix of content. It should be noted, too, that native English speakers composed most of the articles, so there are few of the problems that some ASL products have with articles written by people for whom English is not their native tongue. However, the whole magazine could have used a good copy-editing.

One minor criticism about the product is what was not included: for the convenience of the players, any player’s guide published for an ASL product should include all the errata to date for that product. That was not done here; one has to go to the LFT website for errata.

The 300-pound guerrilla of the KGS Player’s Guide is Carl Noguierra’s monster article on monster scenario KGS2. At 23 pages long, over a third of the guide is taken up with this one article alone. The article takes each section of the KGS map and analyzes the terrain on those sections from both the Soviet and German player perspectives, then offers a comparison of opposing force compositions, before finally addressing German and Soviet “tactical and strategic considerations” for both the west part of the map and the east part of the map. The article is very detailed–almost to the point of exhaustion, especially with some of the longest paragraphs. Though images accompany the article, it is probably best read with the map close at hand.  Is the article any good? Your Humble Author has not yet had the opportunity to play this scenario, but it is worth noting that Carl is an experienced and very good player, so the article is probably unlikely to steer players wrong.

The Jim Brackin strategy article on the campaign games is shorter and less involved and is more akin to various tips and observations than a true discussion of strategic options.

The Campaign Game replay will mostly interest readers who have already played a campaign game, or at least a monster scenario; because it comprises multiple scenarios, it does not list very move or action like a classic Scenario Replay from Avalon Hill did, thus players cannot truly retrace everything that happened but most essentially picture the ebb and flow in their mind’s eye. It was not a good idea to use cartoon animal heads to delineate each section rather than “German player comments” or “Neutral observer comments,” as the cartoon heads are small and hard to distinguish. The article is accompanied by photographs of the game to help illustrate the course of play.

A very pleasant surprise, at least for some ASLers, is the inclusion of a KGS-specific SASL mission with the Players’ Guide, helping to keep the forgotten flame of SASL alive. One page of the mission, consisting of four charts and tables, appears as page 57 of the magazine, while the rest of the information needed to play the mission is included on the scenario card. It probably would have been best to include everything on scenario cards, as many SASLers are likely to have to scan or photocopy the magazine page in order to include it with their other SASL materials. Since the back of the scenario card with the SASL Mission is blank, it would have been a no-brainer to include the charts on the reverse side.

The mission itself is SASL Mission KGS1 (Lt. Danilov’s Deadly Matilda), designed by Andrew Hershey, and is based on one of the scenarios in KGS. It utilizes a small section of the KGS map.

In addition to the SASL Mission, the KGS Player’s Guide comes with 9 scenarios (KGS16-KGS23, FT224); 8 scenarios have a KGS designation, while one has an FT designation (see below for why). Andrew Hershey designed 8 of the 9 scenarios; Lionel Colin the eighth.

The one “odd man out” of the scenarios is FT224 (The Guardians of Hell’s Gates). This is not, strictly speaking, a KGS scenario.  Rather, it is a scenario depicting an action in 1994 in the Korsun pocket between Soviet and Waffen SS units. In other words, it is far away in time and geography both from the events of KGS. However, because it uses the KGS map, apparently a decision was made to include the scenario here rather than in, say, a From the Cellar scenario pack.

Among the Cholm scenarios, several are interesting, including KGS23 (Coming Down the Pike), which is a scenario that comes in two “phases,” each of which is four game turns long. After the first four turns, i.e., the first “phase,” there is a “mini-refit” phase, in which the battlefield is cleaned up a bit, after which the festivities start againn. Both sides get some chooseable additions to their OBS for Phase II. There is novelty here, but it is also accompanied by considerable complexity.

The biggest scenario here is KGS22 (Successful Second Time Around), depicting a major German attack that uses perhaps a fifth of the playing area of the map. In this scenario, 40 German squads, 13 leaders, 2 guns, 4 AFVs, and some OBA and Stukas take the hurt to a Soviet force of 43.5 squads, 7 or 8 leaders, 3 guns and 1-4 AFVs, plus copious fortifications.

Overall, the KGS Player’s Guide looks like a good value for any fan of Kampfgruppe Scherer, and all ASLers ought to be pleased that LFT is dedicated enough to support their products with follow-on efforts like this one. 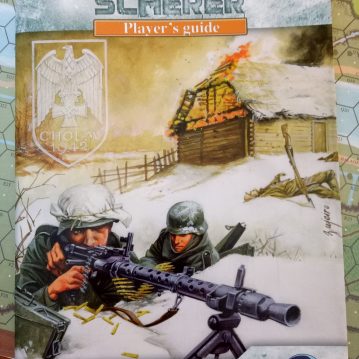