Kharkov:  Battle for the Square (hereinafter simply referred to as Kharkov) is the latest historical module from Critical Hit.  It depicts a sideshow of von Manstein’s “backhand blow” that finally stemmed the Soviet winter offensives of 1942-43 and recaptured Kharkov.  The sideshow is the capture of Kharkov itself, as von Manstein had intended that the city be encircled, but Waffen SS general Paul Hausser sent the 1st SS Panzer Division Leibstandarte directly into the city, resulting in several days of intense but needless urban warfare before the Germans re-recaptured Kharkov.

In terms of game situations, Kharkov is just another city fight, with little about the nature of the battlefield to distinguish it from the many other city fight HASLs that have been published, including many published by Critical Hit.  The sole distinction that can be made is one that would appeal to “SS lovers” (unfortunately, there are more than a few of these in the ASL community), as Kharkov features high-powered Waffen SS squads on the attack.

Even those infatuated with the SS, however, might ponder a bit before picking up Kharkov, because so much of this module suggests hastiness and sloppiness in development and production, as will be shown.

The game map features the Kharkov city square (thus the title) and the surrounding area.  The square itself and surrounding major buildings are actually rendered pretty well, considering the need to fit them into a hexgrid.  The further one gets from the square, however, the harder it often becomes to reconcile the map with what the terrain actually looked like in 1943.   The map has been “winterized,” which means that open ground is a shade of light grey and most of the map colors have been muted to the point of almost being non-existent.  While Desperation Morale likes winterized maps when appropriate, there is actually a bit too much muting here, making walls and hedges (of which there seem to be an over-abundance) sometimes a bit hard to distinguish and generally rendering the map a bit less interesting and more gray than it needed to be.  There are also various tiny smeared blotches throughout the map that seem to be shellholes, though this is not explained in the rules.  Because of way the map was winterized, they don’t actually resemble shellholes very much.  Overall, though, the map is not actually bad, just somewhat monochromatic.

Most of the counters represent duplicates of counters already in the standard core module countermix.  The MMC for both sides, however, are represented in Winter Camouflage, which might be useful in other situations.  Kharkov also provides Waffen SS and Soviet “assault engineer” squads in the vein of Valor of the Guards, as well as NKVD troops of the type first created in Valor of the Guards.  Kharkov also introduces some “militia” units, which are basically treated like partisans, as well as a new 8+1 commissar counter.

The Waffen SS counters are all in black for the benefit of SS aficionados.  However, such fans may be disappointed, as sloppy quality control has made many of the counters useless, as the backs of counters often do not match their fronts.  So, for example, the SS countersheet contains 8 red MMC counters for berserk SS squads, as well as 10 German and Soviet location control markers.  However, what should be the backs for those counters actually appear on the back of various SW counters.  Meanwhile, the backs of SW counters appear on the backs of the berserk and location control counters.  The backs of all or most of the leader/hero counters are similarly screwed up.  All in all, it seems that 4 rows of Waffen SS counters (i.e., 40 counters) were screwed up in this manner.  The Soviet countersheet contains the same problem, but to a lesser degree; about 20 counters seem to be affected.  It is usually not a good sign when there are such a large number of counter errors.

The rules are also sloppy.  At some point, for example, it was apparently intended that Kharkov have a campaign game, because there are references to campaign game firefights at various places in the rules.  However, though there is no campaign game in the published version, somebody forgot to remove all the references.

Instead of a campaign game, Kharkov comes with 10 scenarios.  Eight of the 10 scenarios use only a portion of the Kharkov map, sometimes a very small portion, while the remaining two allow use of the whole map.  The scenarios are full of bad-ass SS squads and AFVs (including armor leaders in almost every scenario and 10-2 or 9-2 Waffen SS armor leaders [!] in no fewer than 5 of the 10 scenarios).  The scenario cards have some odd typos on them, such as “dr” appearing randomly on some of the “sets up”/”moves first” lines.

Designer Larry Winslow is infatuated by OBA and in modules he designs the scenarios tend to have an abundance of OBA.  Kharkov is no exception.  Fully 9 of the 10 scenarios have OBA, with many of those scenarios having 2, 3 or even 4 different types of OBA.  For ASL players who are not all that crazy about OBA, this module is definitely not for them.  The heavy prevalence of OBA in Winslow-designed products probably ends up limiting their playing audience by a fair degree, as some ASLers do not like OBA because of its added complexity and time, while others are not crazy about it because of the power it has to unbalance a scenario based on its effects or absence.  Obviously, for those who do not mind OBA, this is not a problem.

Some of the scenarios seem as if they could be interesting.  K2 (The Zoo-Lancers) is a medium-to-large action depicting a Soviet attack across the Zoo area south of the Square.  Both sides have some toys and there are both infantry and armor battles.  K4 (A Walk in the Garden) portrays a German attack in a different portion of the Zoo and Garden areas, with both sides funneling in reinforcements as the battle moves to a crescendo.

There is no truly massive scenario in Kharkov, but one of the meatier scenarios is K8 (“I Hear the Deep Mournful…Urra!”), depicting a major portion of the German attack in February.  Both this scenario and the other really meaty scenario, K10 (Nothing to Fear), may possibly not be based on any specific actual historical actions; their “historical descriptions” avoid even a single reference to any specific fighting and seem quite generic.

In fact, several of the scenario descriptions seem generic and devoid of references to specific tactical actions.  K5 (Track Meet) is one example:

“The 51st NKVD CFSD and the 5th NKVD RSD were security for convoy and rail respectively.  They were renamed the 26th NKVD RSD in February 1942, and in August 1942 were joined by an HQ company and 5 combat battalions.  While strong in numbers they were spread over a large area still working as security for the local railroads.  Some were deployed in Kharkov in early winter 1943 and would face the bitter struggle for this important city.  The Russian units were made up of soldiers not fit for front-line duty.  Regardless, these men would be hurled into the maw of the elite of the German war machine in an effort to bleed the enemy in the streets of Kharkov as the house-to-house struggle continued on the 12th.”

Notice how there is no mention of any specific fighting or incident or objective; someone could have written this with Order of Battle information alone.  This is in contrast to some of the other historical descriptions in Kharkov scenarios, where specific actions are described or alluded to.  Either Track Meet is simply an example of sloppy description writing or this scenario was made up rather than being based on a historical incident.  One hopes the former rather than the latter.

Overall, Kharkov comes with too many flaws for it to be recommended to most ASLers.  Fans of East Front city fighting may still decide that it is worth a look, though the price ($129) is pretty outrageous considering the modest contents (as well as their quality).  MMP’s Festung Budapest is a better alternative with much more play value.

2nd Edition (Backhand Blow ’43) comments: In 2015, Critical Hit renamed and re-issued its Kharkov module as Backhand Blow ’43.  One of the purposes in doing so was to convert the module to Critical Hit’s new style of map, which uses 12″ x 18″ heavy paper glossy map panels that must be assembled to form the map.  With Backhand Blow (hereinafter BB), 6 such map panels have to be assembled, which is a pain in the neck.  The panels are glossy, too, which can cause glare.  The main advantage of using the map panels is because colors tend to appear brighter and clearer with such panels, but BB uses a winterized map that really has hardly any color on it in the first place, so the new format really has few advantages for this particular product.  Critical Hit did increase the hex size rather significantly, so those ASLers who love large hexes might be pleased.

It may have been the larger hexes that caused Critical Hit to attempt an experiment with BB that has never been tried before in the ASL world.  Critical Hit released two versions of BB.  One, dubbed the “Standard-Sized Counter Collection Edition,” includes a normal set of ASL counters that are very close to the counters of the first edition, with two main changes.  The first change is that the troublesome counter errata of the original edition seems to have been fixed; the second change is that the black SS counters of the original edition have been unexpectedly, but happily, replaced with blue SS counters.

However, the other version of BB uses extra-large counters.  MMC, SMC, and SW are 5/8″ in size, not 1/2″ in size, while vehicles and guns appear in 3/4″ size in this version.  The countermix is smaller than in the “standard-sized” edition as well.  This seems to be an experiment of sorts, with Critical Hit wanting to find out how well this version sells.  If it sells well, one could easily imagine Critical Hit once more re-doing their entire product line with “big counter” versions.  If that happens, Desperation Morale is likely to have the web equivalent of a stroke.

As of this writing, Critical Hit is selling the extra-large version for the extra-large price of $99.95, while the “standard” version is going for $79.95.  That latter price, one will note, while still very expensive compared to the physical contents of this module, is still much cheaper than the 1st edition sold for.

Note that only a thin strip of text at the top of the front of the module will reveal which version of the module–large or normal counters–it is, so beware of accidentally buying the unintended version. 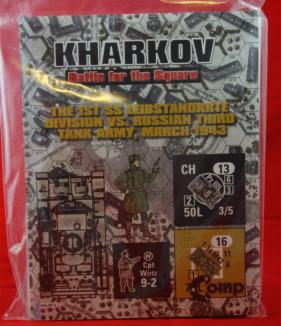