Home > Products > King of the Hill

After visiting the Pacific with Blood Reef Tarawa, Heat of Battle’s third historical module, King of the Hill (KotH) returns to the Brits on the Western Front in 1944.  KotH depicts the fierce struggle for Hill 112 in late June and early July 1944 between the British and the Germans in Normandy.  Hill 112, though not much of a hill, was nevertheless a key piece of high ground to the southwest of Caen.  The British needed to capture it to continue their efforts to circle around Caen to the south.  Tremendous see-saw battles developed between the British, including the 43rd Wessex Division, the 15th Scottish Division and the 79th Armored Division, and the Germans, who among other forces threw the 9th, 10th, and 12th SS Panzer Divisions into the fray.  The British lost the struggle for the hill, which was not abandoned by the Germans until the breakout in August.

What makes KotH so interesting is the striking open nature of the terrain.  It guarantees that combat will be bloody unless resources are invested in entrenchments (if they can dig through the shale) or smoke.  It also assures lots of easy targets for predatory Typhoons flying over the battlefield.  Unfortunately, the map, though adequate for the module, is unattractive and somewhat hard to read.  It uses odd colors for the different elevation levels; it also comes with a thick white trim around the edges that Heat of Battle suggests players should “feel free to trim.”  However, most players will not enjoy the prospect of having to cut up their map.

The special rules in the module go to great lengths to recreate the feel of combat around Hill 112, and do a good job.  These include everything from special Typhoon rules to rules for “hot smoke,” which is British smoke OBA with HE shells mixed in.  However, as the designers note, they did try to keep “variantism” to a minimum; in this, they succeeded.  As with God Save the King, extensive reference endnotes explain the historical basis behind the various rules and give added insight into the approach of the designers.  The rules are also cleaner (and better proofed) than in God Save the King; however, this is only relative–the module still includes scenario titles like “Comming or Going.”

KotH includes 10 scenarios, but only 5 take place on the historical map; the others use geomorphic mapboards.  As with God Save the King, a number of the scenarios tend towards the very small, but there are more meaty scenarios in KotH as well (including one that actually has 58 vehicles!).  The scenario cards in KotH are well done and resemble “official” ASL products in artwork and appearance.  Four scenarios are night scenarios; unfortunately, a rather high proportion.

The campaign game is basically built on the Red Barricades and Kampfgruppe Peiper campaign game rules (meaning that entire sections of its rules are actually just references to corresponding rules in those games) and is 6 campaign dates long.  It has a good reputation and campaign game after-action reports suggests that it offers a very interesting campaign playing experience.

Some die-cut counters for use with KotH were offered with HOB’s later module, Berlin: Red Vengeance.

Heat of Battle’s production values still were hit and miss at this stage of its existence, but King of the Hill is nevertheless a successful product that offers ASLers an evocative playing experience. 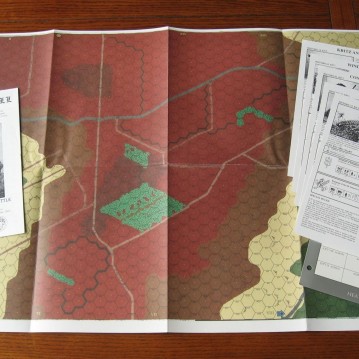