Kohima: Operation C 1944 (hereinafter just Kohima) is a historical module published by Critical Hit in 2019 depicting tactical actions from the battle of Kohima in northeast India in April and May 1944, part of the failed Japanese invasion of India that year, along with the much larger battle at Imphal.  Kohima was important because by capturing it the Japanese could cut off the supplies to all the British forces at Imphal, which would have been a catastrophe.  The Japanese tried to take the ridge key to the Kohima area, but could not, though they largely surrounded it.  The British first had to relieve their besieged force of around 2,500 at Kohima, then begin the grueling struggle to take the area back from the Japanese. It was not until the end of May that the battered Japanese, who had been fighting without supplies for some time, finally retreated.

In the ASL world, Kohima has always been an attractive setting for a historical module, as the geographic area was very small and battle lines did not move very far, making it easy to encompass with an ASL-scale historical map (although the issue of how to replicate the troop density is another matter).   For a great many years, a Kohima historical module had been in the works, designed principally by Shaun Carter for Heat of Battle to publish.  The module had a very attractive map.  However, a combination of circumstances, not the least of which was the de facto bellying-up of Heat of Battle, led to years of stagnation, a situation essentially unchanged even after Le Franc Tireur agreed to partner with Heat of Battle to get the module out.

Critical Hit has developed a reputation over the years of “poaching” ASL subjects it knows are “in the works,” trying to get a product on that subject to market faster.  Kohima might be such a project, but the Heat of Battle product had made no meaningful progress in so many years that this is one instance where Critical Hit can’t really be criticized for taking its own shot at a Kohima product.

Critical Hit’s Kohima is built around a map of Kohima ridge, on which Kohima was located, and a small amount of the territory surrounding the ridge, though not very much; the map has a pretty narrow focus.  The map itself has to be assembled from 6 glossy 12″ x 18″ heavy paper/light cardstock map panels. Such map assemblies can be irritating with that many map panels, but most scenarios only use a portion of the map.

The map artwork itself is typical of Critical Hit maps of this era. It is competent artwork, though it is odd that there is so much jungle depicted on Kohima ridge itself (shelling destroyed most of the jungle).  It appears 8 different terrain levels are reflected on the map, often with double crest lines, and frequently convoluted terrain. Overall, the LFT/HOB Kohima map is more attractive (and seemingly more accurate), but here’s the deal: it’s not published. The Critical Hit map is.

Kohima only comes with 2 pages of rules, which is surprisingly few, even considering that Critical Hit did not include any campaign game in the module. Furthermore, most of the first page is taken up with historical material.  There are only a few relevant rules here.  One is a Light Jungle rule decreeing that all woods hexes are treated as Light Jungle (which is a 2-level obstacle, +2 Bog Check DRM, Vehicle Bypass NA, and no Aerial LOS but otherwise the same). Of course, the ASL rules already have a Light Jungle rule and it is not clear if these supplant those rules or merely modify them.  Another rule is for Denuded Light Jungle, which occurs via SSR and turns jungle hexes into level 2 orchard hexes. This is apparently how Critical Hit treats the fact that Kohima Ridge quickly became denuded of much of its foliage.  There is also a short rule providing effects for Monsoon weather.

Another rule seems to replace the Huts rule in ASL with an extremely simplified rule (they cannot collapse, cannot catch fire, and “only provides +1 TEM for Inherent Fire FP,” although it is not clear what “Inherent Fire FP” is and what exactly this means. Perhaps it means “Inherent FP.” Does it mean that non-inherent FP has a +2 TEM (or no TEM at all)?  Critical Hit also includes another simplified rule, this time for pre-game bombardments, which it has used in other products.  One added rule that is the exact opposite of simplicity is its rule for Bayonet Charges, which takes up 1/4 of the entire rule set of Kohima.  These rules, which give the British a Human Wave capability, were “borrowed” from old Kinetic Energy rules.  Critical Hit loves to throw them into many of its modern products, despite the fact that no such rule is warranted in ASL. It’s pure chrome and has nothing to do with Kohima at all.

Overall, there are hardly any rules at all for Kohima–something that in the abstract might seem like a good thing because it would seem that players could delve right into a scenario, but here the rules are so very very few that it instead raises the suspicion that Critical Hit’s Kohima is a very superficial treatment of the battle.

Kohima does come with counters, though there are issues.  The first issue is how many counters come with the module.  Critical Hit claims that Kohima comes with 4 sheets of counters, but it does not.  Neither the copy Desperation Morale has nor the copy Noble Knight Games used as a sample copy came with 4 countersheets.  Rather, both came with 2.5 countersheets, which, even if one counts the half countersheet as a full sheet, means that there is one missing.

Of the countersheets Kohima does come with, the first is a sheet of 1/2″ counters (280 counters) featuring British Infantry and SW. There are two Flamethrower counters, but one of them also has a British leader accidentally printed on top of everything else, rendering it useless. The British have ATR (in 1944) but no PIATs. Moreover, the British counters are not in British colors, but rather a “variant” color scheme that Critical Hit calls “Khaki.”

The next sheet is another set of 1/2″ counters (280 more) featuring Japanese.  Well, to be specific, they feature Japanese SMC and SW.  A huge number of SW. The British in this module get 3 MMG and 3 HMG. The Japanese, in contrast, get 20 MMG and 20 HMG (!). They get 10 Flamethrower counters.  I guess they came loaded for bear.

What aren’t there any of?  Well, MMC.  Not a single Japanese squad or half-squad in sight.  It appears that Critical Hit intended to include another Japanese countersheet with MMC on them, but did not, at least not for this copy nor the Noble Knight Games copy.  Any purchaser of this product ought to contact Critical Hit over this issue if they do not have Japanese MMC.

Of course, it’s an open question whether one would want those missing Japanese counters, because the Japanese too are rendered in a “variant” color, one that Critical Hit calls “mustard,” but which might be better expressed as “rotting pumpkin.” It’s dark (black on dark orange text is not great to read) and ugly.  Official Japanese counters are definitely the way to go here.

Kohima has 15 scenarios.  None are small in size. Ten of the 15 are large or very large, while five are medium-sized. Some may play a bit faster than their size would indicate because of a lack of vehicles.  No scenarios use Night rules.  Although a number of them are set at night, Critical Hit simply decrees no LOS beyond a certain limit (though it does all gun flashes, IR and flares).  Eight scenarios feature OBA, so you’d better like OBA.  No scenarios feature Air Support rules, which makes it curious that Critical Hit took the time to mention Aerial LOS in its Light Jungle rule.

The scenarios are simple to the point of being simplistic.  While simple, straightforward scenarios are often welcome because one can get right into them and play, it is very strange for a product to have every scenario be that way–and here we are talking about 15 scenarios.  In most scenarios, the attacker sets up in one specific area (or enters from off board) and the defenders are set up in one area. Then they fight each other. Occasionally a force may have two set up areas.  Only three scenarios even have any reinforcements.  The victory conditions are also very simple. Not a single scenario has even a single flavor rule or other SSR to help simulate the nature of that specific action.  The scenarios seem somewhat superficial and almost generic.

Although Robert Martin is credited as the designer, no developer or playtesters are given credit, which never is a good sign. 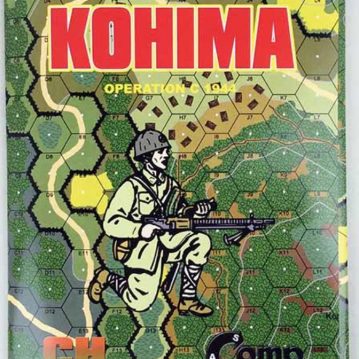